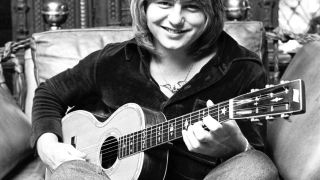 Emerson, Lake & Palmer mainstay and an original member of King Crimson, Greg Lake makes a return to the stage as a solo artist for the first time in almost 20 years with an extensive tour of Germany and the UK throughout October and November.

The last time you toured on your own would have been in support of your second solo album Manoeuvres _– in 1983! Why decide to go on tour now? _

Essentially, all musicians are live performers. For me, playing music is playing live music. There’s only so much writing and work in the studio you can do before you feel the urge to play to an audience. I think it was some sort of unaccountable timing factor, you just feel that the time is right. And I assembled this fantastic band, great players, and just felt the urge to go and play live music. I think it’s really that simple.

So what can we expect this time around?

Well, it’s a music-based show rather than lights and all of that. I’m going to be performing a selection of material, from the beginning of my career all the way through. And I’ll be performing the things people are used to hearing, all the hits you know, but I’ll also try and perform some stuff that never got performed before. Like some of the odd ELP tracks that never got performed, so there’s something different for people to hear.

As well as ELP, King Crimson and your two solo albums, you’ve been involved with a variety of musical projects, some of which never came to bear fruit, as your From The Underground compilation albums (1997, 2003) attest. Will we be hearing any of that material?

Um, a little. I also want to play some things that have not been recorded, surprise things as well. It’s a mixture really. It’s difficult because people obviously expect to hear things they know and they’ve bought in the past and things I’m known for, Pictures At An Exhibition, Court Of The Crimson King, …Schizoid Man, those sort of things. So it’s a blend of doing things that are known and popular and things that are less well-known. So I hope it’s going to be a mixed-music evening.

It’s been a while since you last trod the boards. Any trepidation?

Only to the extent that one can never predict – and I never try and predict – what the public reaction will be to anything. But I’m certainly very confident in the band, a sensational band, and I really enjoy playing with them so I think that’ll come across. From a playing and performing standpoint I’ve got no concerns whatsoever. Obviously the whole thing of touring again and getting back into it is quite nerve-wracking, all the preparation for it.

You toured with Ringo Starr a few years ago but your last major tour would have been with ELP in 1998. There have been some charity shows with Roger Daltrey, and playing with The Who in the studio and on projects that didn’t come to fruition, but two solo albums (Lake’s self-titled debut appeared in 1981) isn’t much to show for almost a quarter of a century. What do you do with your time?

Not a lot. I don’t crave the spotlight. I don’t feel a duty to be publicly performing and I haven’t got any huge desire to be famous or in the public eye. It’s as simple as that. Music for me is something I have a passion for. I play and write all the time, but to perform I have to feel there’s a genuine motivation to do it. I don’t just make albums out of a sense of ‘Shit, if I don’t make an album I’ll be forgotten about.’ I’ve played thousands of shows and after a while it’s not just about proving you can do it, it’s about doing it for a reason. When I play I like for it to really be special.

You’re known as a producer as well. Have you been doing much of that?

Not really. I do a lot in the studio I have at home, I’ve been doing a lot of writing and working on various recordings that I’ve done here and I recorded with The Who on their last single. But not a lot, to be honest.

The obvious question – with it being the 35th anniversary of Emerson, Lake & Palmer – will you ever get back together?

I doubt it. I had been in favour of doing a tour to celebrate the 35th anniversary and to celebrate the Beyond The Beginning DVD, but it didn’t come off. I think it’s water under the bridge. It was great and all of that, but I don’t think we’d ever reform to record another album. You can never say never, we all still talk and get on. It’s not one of those things where the feelings are bad. It was a moment in time and I feel the future is the place to be, not the past.

You’ve worked with some of the biggest names in music, including Bob Dylan, Ringo Starr, The Who, Toto, Gary Moore, Asia and Cozy Powell. Anyone left you’d like to work with?

To be honest, I like any great player. Anybody that’s really committed and dedicated to their music is always a pleasure to work with. They light you up like a firework. I love musicians but it’s not like I’ve got a list of people. There are people I would enjoy working with; I went to see Andrea Bocelli the other day and he’s someone I’d love to do something with. Odd things people might not think I’d do…

You’ve been involved with various ELP projects over the years but you’ve never done the same with King Crimson. Why?

When the band broke up in 1969, Bob [Fripp] wanted to carry on but I felt that Ian McDonald and Michael Giles were so fundamental to the chemistry of the band that I didn’t really feel comfortable with continuing and replacing them. I always view the original King Crimson as a very special creative force, it was a very unique band. Robert took it forward and has done some great things but for me it was the first band that had the magic. I worked with Pete Sinfield a lot and the whole of King Crimson are good friends and we meet socially. It’s like a family reunion; peculiar, really. A wonderful warm feeling.

Thanks to his charity work with Roger Daltrey, the prog rock legend ended up playing bass with legendary hard rockers The Who on their most recent single Real Good Lookin’ Boy. It was an experience Lake enjoyed tremendously.

“Well, it’s only Pete and Roger but you can still see why they were so successful. It’s a magic combination and they’re highly talented people. The band was great, Zak Starkey, Ringo’s son, and Rabbit [Bundrick] on keyboards and Simon, Pete’s brother. It’s a great band and they’re wonderful to work with.”

STILL YOU TURN ME ON (LIVE)

THE MAGNIFICENT SEVEN DEGREES OF SEPARATION

From Greg Lake to Chas & Dave in seven moves