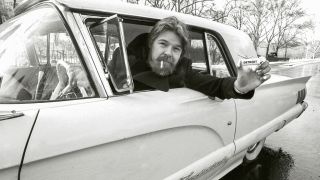 “Here we are again, only eight years later,” Bob Seger says as he settles into a large leather recliner in the living room of his house in the northern suburb of Detroit. “I’m so fast,” he adds, breaking into a hearty laugh as he cradles a pack of cigarettes, ashtray and lighter in one hand and gets ready to talk about his latest album, Ride Out.

It’s not big news that Seger takes his sweet time between albums. Since 1982 he’s averaged six-and-a-half years between new releases, and he’s put out only two all-new studio albums in 19 years. Ride Out is the follow-up to 2006’s Face The Promise, which comes 45 years after his debut album, Ramblin’ Gamblin’ Man and on the back of a combined sales tally of some 65 million records.

Ride Out has a bit more roots than rock, which suits the 69-year-old Seger. But you’ll still find him on the road in 2015, and he makes it clear that the fire inside isn’t close to burning out.

What’s the goal at this point? Is it to have hit singles any more?

No, not at my age. Bottom line: as good a song as I can write. If anything’s an average song, it’s gone.

Has the definition of a good song changed for you over the past fifty years?

It’s always melody, lyric, a little uniqueness. Sometimes I’ll write a song I can’t really sing and it’ll get eliminated; my range is not quite as wide as it used to be. Or it might not make it through the studio process. But it’s mostly gut, and I work hand in hand with [engineer] David Cole, and I play it for everyone close to me. My kids play it for their friends, so I get young people’s comments, and my wife’s family’s comments, and I run it by Kid Rock too. He’s a good friend and a great songwriter.

You’ve spoken about different songs you were working on during the past few years, some of which are on Ride Out and others not. How many songs were part of the process?

Probably twenty-four were cut. The first three songs I wrote were Let The Rivers Run, Hey Gypsy and Ride Out. David and I messed with Ride Out for a long time, and I kept writing the lyrics over and over and over because I knew it lacked melody, so the lyrics had to be special in order for it to come off. It’s kind of atonal but I loved the groove.

Hey Gypsy is a nod to Stevie Ray Vaughan.

It’s a love song to the memory of Stevie Ray Vaughan, who I always adored. I’d always wanted to write a Stevie Ray type of song, so I tried to channel the way he would do it and write really straight, cool blues. Kenny Greenberg was my guitarist at the time, and he gets this old Stratocaster and this really old, shitty-looking amp, but boy did it sound just like Stevie Ray Vaughan. Then the bass player, Glenn [Worf], said: “I know his organ player, Reese Wynans.” So we called Reese and he played on it. And I liked him so much he ended up on the rest of the album.

Let’s talk about the covers you recorded for the new album.

I saw [Kasey Chambers and Shane Nicholson’s] Adam And Eve on _The Edge Of Country _[TV show], and made a note of it as I had to hear it again. It had something I liked – a minor key, it was half-bluegrass/half-country and was very rootsy, with interesting lyrics. I was a big Waylon Jennings fan, and I heard The Devil’s Right Hand in a movie called Betrayed in 1988. Every time I’d see it on cable, maybe once every five years, I’d say: “God damn, that’s a cool song. I want to do that some day.” And then, in maybe 2000, I found the movie in a movie bin, watched it and was like: “Oh my God, Steve Earle wrote it! No wonder I like it.”

And Detroit Made sounds like it was custom-written for you.

Oh yeah. When I heard the John Hiatt song I downloaded it, put it in my car and drove around and sang harmony parts. And, of course, the subject matter’s a no-brainer because we all love cars in Michigan.

I listen to a lot more music than I used to. Don Henley used to say to me: “If you get stuck, go back and listen to your old stuff and see what you like about it and go from there.” And I did that for years. Now I want to write something different and not repeat myself. Satellite radio is really cool because you can listen to genres and hear unusual stuff – bluegrass, country, outlaw country…

What tells you a song’s right for you?

Well, I think the only thing that’s really off for me is jazz. I think that was just before my time. I grew up with Elvis and Jerry Lee and Fats and all those guys.

Would you ever listen to rap or EDM?

My daughter [Samantha] loves that stuff. She loves rap and she loves Eminem. And she tries to get me into it. We did a three-day autumn leaf tour last year and I listened to all her music. It was electronic, hip-hop, pop, young pop. And I sat back and said: “Go ahead, run the radio. I need to hear this stuff. Tell me what you like.”

There are three songs on the new album – Ride Out, All Of The Roads and Let The Rivers Run – that seem to form a thematic triangle. Are you trying to tell us something?

I know what you mean. It’s kind of a summing up. And people have said: “Ride Out sounds a little final.” And I’m like: “No, that’s not really what I meant.” It means to ride out, clear your head from all the stuff that’s making you crazy. But it could serve as a final title. So if I decide when I turn seventy in May that, y’know, enough’s enough…

In 2013 you made some comments about doing one more album and one more tour. How do you feel about that now?

The big deciding factor is my voice, whether it holds up. That’s when I’ll know. When I’m out on the road this time I’ll be paying a lot of attention to how I sound.

You’ve been doing this a long time. Is there something attractive about the prospect of retiring on your own terms?

Well, there is and there isn’t. I feel kind of responsible for everybody that goes on the road with me. I feel like they make the most money with me and they play their hearts out for me. And that’s important. So I want to make sure that they’re taken care of a little bit. That’s a factor. It’s just that I also want to be graceful about it. I don’t want to stay too long.

What would a retired Bob Seger be like. Can you just shut off the creativity?

The alternative would be to write with other people. I’ve always written alone, but I’m sure I could help other songwriters a little bit. I’m a pretty good lyricist. I’ve been doing it for forty-nine years and got ideas about structures, chords and things of that nature. I’ve often thought about writing with Billy [Payne of Little Feat and occasionally the Silver Bullet Band]. He has an enormous background in composition and plays some great stuff I would never think of. That’s what would be the most fun – to do songs that I can’t even think up.

Ride Out is out now on Capitol Records.