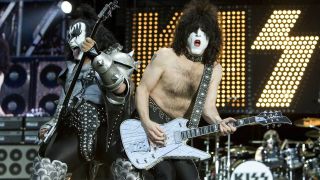 Do not mistake the guitar pictured below for an Ibanez Iceman. Although similar in look and vibe to that classically angular design, it’s actually an Ibanez PS1, the signature model of Paul Stanley. Make the above blunder in the company of the Kiss guitarist/vocalist – as this writer did during a rather stilted interview in 1997 – and you’ll regret it. “Let me stop you right there,” barked the Starchild, who proceeded to give me a lecture on the subject of errant guitar identification. Ouch.

The original PS guitar was the result of an approach made by Ibanez’s parent company Hoshino-Gakki to Stanley on Kiss’s inaugural visit to Japan in 1977, and he used them until around 1980. He got back into bed with the company in 2014, and among a brace of new models is this, the PS1 Cracked Mirror, an homage to a ‘shattered mirror’ guitar produced for Stanley by Ibanez USA’s Jeff Hasselberger in 1979.

There are obvious vein-severing dangers inherent in flailing away on a guitar that’s adorned with what seem to be bits of jagged glass. However, the finish here comprises pieces of acrylic mirror that are individually cut and shaped by hand to a specific pattern and there are no sharp edges whatsoever.

The pieces are embedded into a maple top that sits on a mahogany body, and the guitar’s monstrous tone is beefed up by the inclusion of a brass tone block that sits beneath the Gibraltar bridge, plus a unique half-bone, half-brass nut. Pickups comprise a pair of Seymour Duncan humbuckers, and the super-smooth set neck is topped with an ebony fingerboard.

The guitar sounds amazing, and is as visually over-the-top as Kiss themselves. List price for one of these beauties stands at more than $9,300, but if you want the best…

The National: one of the most recognisable axes ever

In the days before amplification, guitar players had to rely on other innovations to make themselves heard. One option was a National steel guitar, an acoustic instrument that featured either one or a series of three internal aluminium resonators that significantly increased the volume of the sound produced by the strings.

A number of versions are still made by National, and the flagship of the range remains the Style O. Introduced in the late 1920s, it traditionally features a brass body plated with highly polished nickel and is etched with Hawaiian-inspired palm tree designs.

The front cover of Dire Straits’ multi-million-selling Brothers In Arms album is a photo of mainman Mark Knopfler’s own 1937 14-fret National Style O single resonator. In 1930 that guitar would have set you back around £45, while today National’s contemporary repro of the exact guitar, the Style O-14 Replicon, sells for £2,499. Knopfler (pictured)still plays one when the mood takes him, and few guitars look better under stage lights.