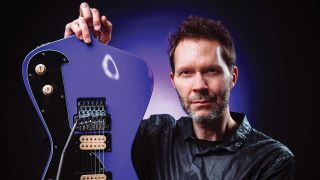 At the age of 19, Paul Gilbert was the youngest ever tutor at the renowned Guitar Institute Of Technology in Hollywood. His virtuoso metal band Racer X was one of the star turns on Mike Varney’s shred label Shrapnel, and Gilbert hit pay dirt in 1988 when he co-founded the hugely successful Mr. Big.

In May he released his latest instrumental solo, Behold Electric Guitar.

There are some fun titles on the new album: Sir, You Need To Calm Down, I Love My Lawnmower. What comes first, the title or the tune?

I actually wrote a vocal melody and lyrics for most of these tunes. The opening track, Havin’ It, was: ‘Havin’ it don’t make me stop wantin’ it/The back of it just makes me want to see the front of it.’ If I want to play [guitar] like a singer, I need something to sing. It gives you a musical and emotional structure.

You’ve toned down the shred in favour of very lyrical playing. Was that a conscious decision?

When I was a kid you’d still hear muzak, elevator music, so for decades I thought if an instrument plays a vocal line it’s going to wreck it. But then I did the G3 tour with Joe Satriani [in 2007]. He’s fantastic at playing melodies on guitar, and I realised it can sound good if done with care. One of the most satisfying things a musician can do is make that connection between your hands and what you’re hearing with your inner melodic generator. This album’s been my most successful in those terms.

You’ve always had an off-the-wall sense of humour. Has that helped or hindered your career?

I’m doing the best I can with what I have. If I woke up one morning and looked as amazing as David Coverdale I’d go for it. In Racer X I had big hair and wore eyeliner a bit, but other people had bigger hair and looked cooler. You get a sense of what’s working for you and what’s honest and authentic.

Teaching is in the toolbox, from GIT to your online guitar school. Where does that impulse come from?

I had some lessons, but I taught myself a lot, and people just always came to me to learn. My fantasy was we’d get off the tour bus and there’d be all these beautiful girls waiting for us. The reality was it’d be a bunch of guys who wanted guitar lessons. But it’s great. Teaching keeps me immersed in music, it’s inspiring and I’m never bored.

Will Mr. Big be back?

You never know. We did a lot of touring these last couple of years and I got burned out on playing the same great set every night. I’ve got my own tour this year, and I’m always trying to do something new. It’s terrifying but interesting.

There’s a pleasing paradox in that your biggest hit, Mr. Big’s To Be With You, features your simplest solo.

I like that solo! Everybody who hears what I do is an individual. People hearing that in the pub, that’s probably the only time they’re going to hear me play anything. Those who come a masterclass will know my deep cuts and will be angry if I don’t play Scarified by Racer X. I’m just fortunate and happy that anybody’s paying attention.

Behold Electric Guitar is out now via Mascot/Music Theories Recordings. Paul Gilbert will tour The UK in September.