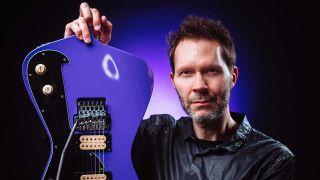 Most of the songs on Behold Electric Guitar were inspired by me writing lyrics, and singing vocal melodies. At some point, I would translate the vocal melody into a guitar melody.

This would set me free from the limitations of my vocal range, and allow me to bring the “voice” of my guitar into the music. Here are some ideas about the beginnings of each song, and what the songs mean to me.

This is the idea that even when I am satisfied with something, I still want more! It can be love, or guitars, or a great musical groove in the key of C. If it’s good, I want more of it! The lyrics that formed the melody are:

A recent Mr. Big video was filmed in a big warehouse in downtown L.A. The man who owned the building was there, and he loved to show us every room of his building. In fact, I never met someone who so obviously loved their building. That inspired these lyrics:

Now that last line would get me in trouble, so I'm glad I could turn the song into an instrumental before anyone would be offended!

When I was six years old, I took guitar lessons. After a couple months, I decided to quit, because I didn’t like the learning Mary Had a Little Lamb.

4. Love Is The Saddest Thing

I had written some very sad lyrics, and so I tried to write some very sad melodies and music. But as I was working on it, I got tired of being sad!

So I decided to change the music completely, and to make it a high-energy rock boogie. Suddenly, I had a big smile on my face. Music can be great medicine for the spirit!

I missed a flight home after a long tour, and I was so exhausted, frustrated, and overwhelmed that I just sat on the floor and moaned.

The lady at the airline counter told me, “Sir, you need to calm down!” So I calmed down. And I realised that this could be a great song title!

I originally wrote this song for Mr. Big, but I had trouble finishing the lyrics. When I started to play the melody on guitar, the rest of the song flowed very easily. The meaning of the song is about putting my phone down, and just looking at the natural world around me instead.

I wanted to write a song with good blues melodies and riffs. I had been listening to a lot of Johnny Hodges’ jazz and blues saxophone playing for inspiration. Johnny’s nickname was “Rabbit,” so this song is for him.

This song is my idea to support real, human being drummers. I love the dynamics and feel of musicians who are human beings! So much modern music uses computer programmed drum loops.

Every kind of art can have something good to offer, but for the most part, drum machine drive me crazy! So please support real drummers!

I was looking at possible photos for my album cover, and of course many of the photos were me making a “rock face.” I tried to think of what kind of thing (besides playing rock) could give me a face like that.

I thought that if a snake bit my toe, I would make a similar face. And since blues can be about dealing with hardship, I thought it could make a good blues song!

My house in Portland is in a urban area, so my lawn is very small. But I still need to mow it. I bought a rechargeable battery-powered lawnmower, and I love it!

I read the line “a herd of turtles” in a book, and that small phrase inspired me to write a long poem. I also had a high-energy funk guitar riff that I wanted to make into a song.

Somehow the contrast between reading the poem and the fast funk music worked really well. The poem is about overcoming challenges. The turtles are looking for a more interesting life. The rabbits don’t want to be eaten by the fox.

And I am trying to play music, even though I have severe hearing loss. In the end, everyone believes they can find a solution, and tries their best to find it!

One of my musical partners, Freddie Nelson, was asking me how I liked living in Portland. I replied, “I wanted to move Portland so I could walk to things. What didn’t realise, was that when you can walk to things… Things can walk to you!”

The things that I wanted to walk to were shops and restaurants. The things that can walk to me are homeless people, who push stolen grocery carts around. Of course it’s not nice of me to call anyone a “thing.” But it’s not easy to always be compassionate when people are leaving lots of trash on the sidewalk, or breaking your car window to try to steal something.

Things seem to be getting better this year, so hopefully the local government is figuring out some solutions. Anyway, this can be a touchy subject, but my song is actually lighthearted, and instrumental!

So my songs were inspired by many different parts of life. But the finished music is not only about the original meaning, but about the music that I built around it, and the performances of the musicians.

The lyrics that I wrote to build my songs were like the scaffolding that is used to construct a building. It’s important in the construction, but after the building is finished, the scaffolding is taken away. The same thing is true for my songs. I hope you enjoy what I built!

Behold Electric Guitar is out now.