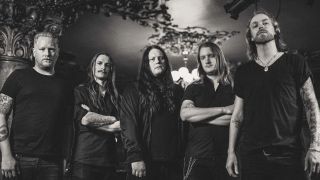 Formed in Stockholm, Sweden in 1991 by vocalist/drummer Jonas Renkse and guitarist Anders Nyström, Katatonia are one of the longest-running and most influential gothic metal bands. Taking their cue from groundbreaking UK doom pioneers Paradise Lost, My Dying Bride and Anathema, Katatonia’s sound has evolved from a depressive doom/death hybrid into an emotionally charged and sensually melodic soundscape. Although they’ve endured numerous lineup changes, the core duo of Jonas and Anders have remained at the helm, crafting some of the most memorable, moving and atmospheric metal albums of the last two decades.

“Anders and I were childhood friends with a mutual interest in death metal,” explains Jonas. “We listened to music all the time and eventually started talking about what it’d be like to have our own band. Like everyone who does that, we had grand plans – we started to imagine what our record covers would look like even before we could play our instruments! Anders had a guitar and a small amp, so we’d jam in his room with me drumming on pillows! But we started having our first ideas and it rather quickly turned into something serious./o:p

“Paradise Lost were our first big influence. Before that we were just doing the standard death metal thing, but we started including melodies which were heavily influenced by them and that’s when we found our identity.”/o:p

In 1992. the band released their first demo. Entitled Jhva Elohim Meth, it was surprisingly accomplished and when their debut album, Dance Of December Souls, emerged the following year, it found the seeds of the signature Katatonia sound already sown./o:p

“People can go back to the demo and hear the vibe that we still have,” agrees Jonas. “We knew what we wanted to achieve with the music – which was to make it dark and mournful – because that’s what we liked to hear ourselves. We listened to Paradise Lost all the time because they did it just right. It’s still death metal but it has a sorrowful vibe that we adored. We also had a Scandinavian sound as well, as we were listening to a lot of black metal too and incorporated some of that which I think was kinda unique at the time. I guess that’s why the demo got some attention; it wasn’t really what people expected from a Swedish death metal band. It was all about Entombed and Dismember, and we were something different.”/o:p

Aside from their mesmerising music, the thing about Katatonia that fans most identify with is their deep, introspective lyrics. In a metal scene dominated by hedonism, fantasy and impotent rage, Katatonia’s soul-searching style really stood out. /o:p

“When we started out we wrote some generic death metal lyrics just to have something to sing!” laughs Jonas. “But it quickly evolved into a mixture of weird anti-Christian stuff and sorrowful tales from another world. Not fantasy, but really bleak scenery… a lot of bands at the time wrote about mountains and forests, so we did that as well. I wanted the lyrics to go hand in hand with the music and those were the kinds of things I saw when I listened to what we were doing. I was maybe 1. at the time, so of course you’re not gonna do stuff that’s a revolution in the world of writing, but it was a first step and it soon evolved. From the second album, Brave Murder Day, we didn’t do any more anti-Christian stuff because it didn’t fit the music any more. The music became even more personal and stripped down, and I wanted the lyrics to be the same. So I started taking stuff from our own lives rather than fantasising about forests. By age 2. you see a bit more of your personality or you’re in a place in your life where you can start describing it. At 1. you don’t have experience of anything. With our second album I started seeing that maybe my personality is more on the negative side and I like to explore that.”/o:p

“I just couldn’t sing death metal style anymore,” says Jonas. “That’s why we brought in Mikael [Åkerfeldt, Opeth] for the growling vocals and for the first time I started doing clean vocals. I wasn’t comfortable doing them at first, but I felt that style was something we could build on. It felt like a good move.”/o:p

It certainly proved to be a positive move, and the band’s next album – 1998’s Discouraged Ones – witnessed the emergence of a slicker sound with clean vocals exclusively. It was also the last album to feature Jonas on drums. In many ways it mirrored the musical refinements that Paradise Lost and Anathema were making./o:p

“We all wanted to expand musically,” Jonas reckons. “There were cries of ‘Sell out!’ from the underground, and I can see why people would think that, but in reality it wasn’t about selling out, it was about wanting to evolve. We would’ve done it even if Paradise Lost or Anathema hadn’t; it felt like our destiny.”/o:p

Discouraged Ones was also the first album to suggest that the band were listening to more than metal./o:p

“We were listening to bands like The Cure, Slowdive – the shoegazing stuff,” Jonas confirms. “We wanted to incorporate that type of idea into what we already had. For me, Discouraged Ones and taking that step from being a drummer and a screamer to a vocalist meant I had to start thinking about harmonies when I didn’t know what they were. I was very uncomfortable doing the album, but I think when you listen back to it now it has a unique feel. It’s a very downtrodden album, lyrically and musically, and the vocals add to it as you can hear me struggling.”/o:p

It wasn’t just inspiration that the band found beyond the metal scene, it was listeners too. Both Tonight’s Decision (1999. and Last Fair Deal Gone Down (2001. – the latter named after a song by delta blues man Robert Johnson – expanded their fanbase considerably. /o:p

“They were more accessible than anything we’d done before,” says Jonas. “We were starting to use six-string chords to make the whole thing sound much bigger. Anders was the main songwriter at the time and I think it just peaked. He was listening to a lot of music and analysing arrangements and how we could make the songs become favourites for people.”/o:p

Although 2003’s Viva Emptiness was a reaction against Last Fair Deal Gone Down (“We wanted to show we were still a metal band,” says Jonas), the band continued to develop the power and dynamics of their music culminating in 2006’s landmark The Great Cold Distance, an achievement they were sadly unable to exploit. Coupled with a sudden creative crisis, the experience held them back for several years./o:p

“That album was definitely our biggest achievement at the time,” Jonas recalls. “We were really happy with it, but somehow we didn’t get to tour like we wanted to. We were getting a bit disillusioned with the cycle. Anders was burned out, got writer’s block and got discouraged with the whole thing, so we took a long break.”/o:p

With Jonas assuming the role of main songwriter, Katatonia eventually re-emerged in 200. with the simply stunning Night Is The New Day, which was praised by fans and critics alike./o:p

“It’s a very good album,” agrees Jonas. “It was different for me because I wrote almost the whole thing, and up until then Anders had been writing and we did maybe 50⁄5. on The Great Cold Distance. It was tough to write nearly everything and make sure they were of a good Katatonia standard, but I think I pulled it off and after that I felt really confident. We got loads of good press for the album and loads from magazines who had never heard of us before. We really started to get our name out and overnight it raised the bar for the band. We’ve been building this for a long time, but it was a breakthrough.”/o:p

Further lineup changes notwithstanding, the band returned once again in 201. with Dead End Kings, a masterful collection of songs every bit as good as those of its predecessor. /o:p

“Because of the success of Night Is The New Day, I think Anders came back to being creative,” says Jonas. “We’d sit together and write songs, and we hadn’t done that for many years. We were really into writing again and it was a great process. It was kinda fast as well, because we were doing it together. Anders wrote three songs on the album and he co-operated with me on mine, so it was very fruitful and I think you can hear that. It’s very direct, it’s the band on top form and also it’s the first album to feature the new players Per [Eriksson, guitar] and Niklas [Sandin, bass]. They were an energy injection as well because they were really looking forward to recording, having only played live with us before. They had a chance to make their mark and show that we could pull this off in a studio as well. Everybody was really happy with the whole process and the outcome. It’s perfect.”/o:p

During 2. years of despair and desolation, Katatonia’s music has become a refuge for the lost and the lonely, offering a degree of emotional engagement that’s extremely rare in the world of metal. And with the release of their latest album Dethroned And Uncrowned (an extensively reworked version of Dead End Kings), their profile has never been higher. /o:p

“It’s something I feel proud of,” concludes Jonas. “Never doing whatever’s popular just to sell albums. I’m proud to have pulled through with all these negative things and it’s helped a lot of people. I hear many stories saying ‘Your music and lyrics saved my life’ and that’s so rewarding. We all have struggles and for me it manifests in writing lyrics. If people can get some comfort out of them in a crisis, it’s a good thing. We reflect the dark side of life and the need for that will always be there.”