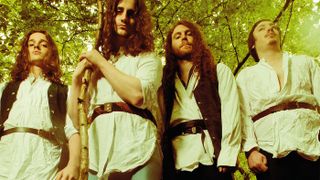 We’re all abundantly familiar with the concept of ‘retro rock’ bands studiously reenacting sounds and styles from the earliest days of metal’s history. However, on their debut longplayer, Prelude, Lancaster quartet Wytch Hazel aren’t content to look back merely 40 or 50 years for their inspiration.

“I was introduced to sacred vocal music on my A-level Music course, and I got a lot from that genre,” enthuses singer/ guitarist Colin Hendra. “We studied medieval dances like pavans and galliards as well, so that was my first experience of it. Then at university I did an experimental avant-garde music course, where it was really welcome to use that as a fusion, using violin bows and tabla drums and playing medieval rhythms. So that was a direct influence.”

Wytch Hazel is Colin’s brainchild, inspired by the challenge of melding these ancient musical ideas with 70s prog-folk and NWOBHM chops. But despite his affinity for the oldest of old days, he baulks at the suggestion that he was born too late.

“I don’t think that I’d really want to be a knight! They were unforgiving times,” he reasons. “The music is magical however; just listening to Early Music recreations by David Munrow’s Consort of London is enough to put me in a trance-like state.”

Despite all the medieval love, Wytch Hazel are unmistakably a hard rock band. Not for Colin the ill-fitting appropriation of lutes and crumhorns alongside crankedamps and guitars: “When people say, ‘We’rea folk metal band’… just because you’ve got a distorted guitar and a violin next to each other, that doesn’t mean that it’s a fusion,” Colin warns. “You can play medieval music on any instrument, but I’m more influenced by the compositional techniques, the types of rhythm, the melodies and harmonies.”

The devoutly Christian lyrics might incite a little controversy (although, as Colin laughs, “We’ve never dropped the J-bomb and mentioned Jesus!”), but he says the real message behind Wytch Hazel’s music is broader than any one spiritual outlook. “Positivity is a big one,” he muses. “I often find that I can be a negative personality, however, I always try to see the positive in every situation. Wytch Hazel is an opportunity to spread positivity at the same time as the creativity. I could try to go all deep on you, but the more I think about it, the more I realise that the music is of paramount importance: it’s mainly about rock!”