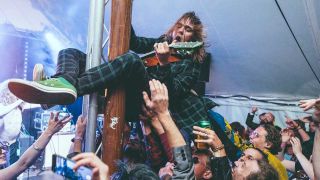 When the world returns to normal and we can pack ourselves into cramped venues once more, call on Mother Vulture.

The Bristol quartet spent the last couple of years building a reputation as a fearsome live act – a tumultuous, anarchic mix of fire and pandemonium – but you know what happened next: Shutdown.

It's been difficult for all musicians, but for a band for whom the act of playing live seemed as much an act of violent catharsis as it did musical performance, it's been especially tough.

After all, this is a band who describe the experience of seeing themselves live as, "hectic blues punk with a live show so chaotic it will leave you with horrific injuries." They're really not messing about.

So they've done what all great live bands should do at some point in their career: they've released a great live album. It's not live in the traditional sense, of course – the lack of an audience sees to that – but it was recorded live in the studio, at the famed Rockfield Studios in Wales. One take. Again, no messing about.

And it's a riot, from the opening blast of Tell Me, which features an opening scream from singer Georgi Valentine that's pure mission statement, to the closing notes of Objectify, which climaxes with a thumping blues riff and unbridled bedlam.

"We hadn't planned to release a live album, and we'd been sitting on these recordings for a while," says guitarist Brodie Maguire. "We realised it sounded much more authentic to our sound and energy than anything we'd previously released.

"I think it essentially comes down to us being a band that thrives on playing live shows, and I think that any who's seen us would vouch for this. So at a time where there's no live music, it seemed good timing to release something live."

While Mother Vulture's name may appear to have been plucked at random from a set of classic rock-themed fridge magnet words (see also: Scorpion Child, Vagabond Hearts, Savage Outlaw, Dirty Thrills, Black Tree Vultures, Black Smoke Trigger, Black Whiskey, Dead Man's Whiskey etc etc etc), it's their music that sets them apart. It's a combustible mix of rocks old and new, imbued with the kind of incendiary punk spirit that fired bands like The Stooges and The MC5.

Just like the best rock bands, it's possible that Mother Vulture are interesting because they don't only listen to other rock bands.

"I love big band swing and rockabilly," says Brodie. "Georgi listens to a lot of rap and hip hop. Chris [Simpson, bass] is into modern rock, and a lot of underground artists. And then Matt [West, drums] is classic Brit Rock like Oasis and The Beatles.

"Where we all meet in the middle is with our roots in rock music like AC/DC, Guns N' Roses, Led Zeppelin, White Stripes. And honestly I think we (somehow!) manage to put across all these influences in what we write."

Doing It Live is a brilliant introduction to the band. It's intense. It's frenetic. It's stuffed with the kind of riffs that have given Queens Of The Stone Age or Royal Blood a career, but pumped full of lawless adrenaline. And sometimes it all teeters on the edge of collapse in a way that's absolutely thrilling.

At the centre of the madness are Brodie's guitar, which grinds and speeds and soars and is usually distorted almost to the point of comedy, and Georgi's voice, which is very much of the Brian Molko/Burke Shelley/Josh Kiszka school of Marmite. These may be barriers to more tender-eared listeners, but for the rest of us? Dive in and enjoy the tumult.

Doing It Live is released later this month, but be quick: only 100 copies are being made, so it's got "future collectors' item" written all over it. It's a great album, but also – during a time when live music is virtually non-existent – it's a vital reminder of what’s waiting for us on the other side.

"We just want to get back out on the road and play shows," says Brodie. "But until then, we'll be writing new tracks, and practising some stunts for our return to stage."