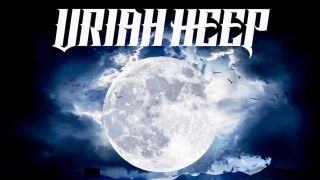 For a man who's been around the block more than several times - Uriah Heep have played shows in 61 countries, and show very little sign of slowing down - Mick Box sounds more excited about the band's 25th album, Living The Dream, than most band's do about their first.

He's not alone. Classic Rock's Dom Lawson described Living The Dream as "as strong as anything the band have produced in two, maybe three decades" in a glowing review, and the Pledgemusic campaign to finance the recording was a triumph, with fans able to claim rewards as varied as getting their name added to the album credits to enjoying lunch with the band.

Below, Mick takes us through each of Living The Dream's ten tracks. The album is out now.

"This was the first song written by our bass player Dave Rimmer, who wrote it with Jeff Scott Soto, who's now singing with Sons of Apollo. What he wanted to do was capture the energy of Between Two Worlds, from Sonic Origami – which he absolutely adores – and he marry that with Wake The Sleeper, and get those two levels of energy in one song. He did it brilliantly, and captured that feel marvellously. We thought it was a stonking rock song, and it definitely deserves its place on the album."

"I think the fans have a perception that we run around the world doing what we do doing what we love, living the dream. And lots of other bands see what we do and see us living the dream too. So that phrase used to come up quite a lot. I started writing the riff at home and we put it together in Phil's [keyboardist Phil Lanzon] studio. It developed very quickly, and became a medium-paced, heavy, heavy track. We're really pleased with it. At the end we go into an 11/8 time signature thing – which we haven't really done a lot with Heep – and that makes it more interesting!"

3. Take Away My Soul

"I had most of the music written, and I went off to see Phil and started knocking it around. Phil was actually working on his solo album at the time, and had one of the singers in the booth. He had a go at him, and the singer responded, 'well, take away my soul, why don't you?' Phil thought all that's a good title. It fit with the music, and we started developing the storyline. There's a lot of stories about social media sites where people film things they do in the bedroom, then break up, and one of them uses the footage against the other to get back at them! We made it a little bit ambiguous. When we got to the end of the song and I just started blowing, and it sounded good, so we kept it. The guitar at the end demonstrates the turmoil of the song's lyrics."

4. Knocking At My Door

"It was another riff I took to Phil, and it started coming on very strong. Lyrically it's about mental health, about somebody who keeps hearing things. There's a lot of people like that, especially people who smoke too much, and they start getting paranoid. I've never done it myself – I've never smoked a cigarette in my life, never smoked anything illegal – but I've witnessed it happen with other people."

5. Rocks In The Road

"Rocks In The Road is more of a progressive song. We let the arrangement grow and flow to get where it needed to go, with a hypnotic riff going on beneath it. It's a very positive song. It's about how there are always going to be rocks in the road, but you'll always come through the other side with positivity."

"I wrote this in France, and I took it down to Phil who started working on it. He came up with some great ideas. Lyrically it's about a guy who plays guitar down by the water's edge, and like any busker who's any good they attract big crowds. And one day he's not there, and you wonder if you'll ever hear him play again. There's so many great buskers out there these days, and usually if they're selling CDs I'll buy them to support them."

"As Phil and I were developing this song, he'd run his Missus off to work in the morning, and I'd have a cup of tea and read the papers. And the song is all about the little stories you read: celebrity and crime living together side by side, stuff like that. We just took that and rolled with it. And being a bit of a progressive song, the band do quite a lot on it rather than just being confined to a couple of verses."

"This is a song that Phil and I had written, but Bernie wasn't comfortable with the lyrics. So we told him, "look, you've got the title, now go away write the lyrics." It's about everybody's schoolboy dreams, really. When your adrenaline is going as kid, and how there's always a girl who accommodate everyone if you want a grope in the bike shed. It's about her, really, and that whole adolescent thing."

9. Falling Under Your Spell

"Quite often you'll see it written that someone will see someone else across the room, and that's it: they have to be with them. This song is similar to that: you see someone across the room and everything else blotted out. All you do is look at her, and suddenly you're following her. To the bedroom, probably."

"It's a comment about people who still go on about the good old days, people who hang on to those memories even today. You're never sure whether they were good or bad days, but they still cling on to them as great memories. And that's a good thing! I see it in a positive way, that those things still live within them. But it's also a comment on the fact that the youth of today will fix the problems of today."