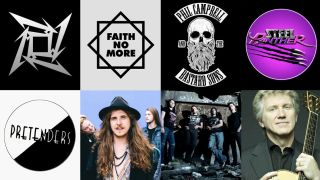 Hey! Look over here! It’s ANOTHER new Metallica track! And it’s good! But yes, exclamation marks aside Hetfield and co rock out on Moth Into Flame like velociraptors with guitars; watched through an old telly by some very big moths. Another tantalising taste of the full LP to come…

Faith No More – Cone Of Shame

“This is one of those tracks that had to be a video, really, because it lends itself so much to visual imagery,” said bassist Billy Gould, of this new single from last year’s triumph Sol Invictus. He had a point, based on the cinematic quality of Cone Of Shame, spanning chilling Americana and raw aggression; tied together by a tense tale of sex, smoky bars, many knives, and one of those plastic collars you put on dogs after they’ve been at the vets (aka ‘the cone of shame’, we assume).

Ex-Motorhead guitarist Phil and his merry men (i.e. his children) continue to prove that theirs is no corny family act, or a case of terrible nepotism. No, all the Campbells here (and hotshot vocalist Neil Starr) can really play, and Bigmouth is a superb tune; relentless, fantastically infectious hard rock that manages to be beefy but bouncy at the same time. We love it.

If you’ve enjoyed the wave of Southern-fried goodies that’s gathered pace in recent years, you’ll want to check out Bad Touch. 99%, taken from their forthcoming debut, was mixed by Rolling Stones man Chris Kimsey, and his pedigree shines through in the gorgeous production at work here. Think A Thousand Horses meets Blackberry Smoke, but from Norfolk.

Stone Broken – Wait For You

Feel like you’ve heard this before? That’s either because you have heard it before, or because Wait For You is so big and radio-friendly it could be a long-lost hit from Black Stone Cherry or Nickelback (before Nickelback became universally loathed). A brooding bruiser of a rock ballad, it’s a confident display from a band with arenas in their eyes.

Back in the 80s, Rik Emmett was one third of Canadian hard rockers Triumph. Now he’s teamed up with members of Dream Theater and Rush, among others, as Rik Emmett & RESolution9. You’d be forgiven for thinking he’s created a prog-metal ‘supergroup’, but as Human Race reveals this is just good old breezy melodic rock – with a sweet hint of The La’s classic There She Goes. The years have been kind to Emmett’s voice, which sounds ace here, and Alex Lifeson’s 12-string guitar adds a beguiling extra dimension.