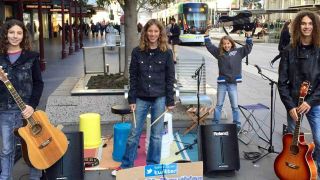 “We’ve been playing together since we were babies,” says MixedUpEverything frontman Todd Dhima. “I bought our first real guitar (as opposed to tennis racquets!) at the age of eight.”

MixedUpEverything are building something of a reputation. Comprised of four teenage brothers (Todd is the eldest at 18, while younger brothers Kevin (drums), Blake (guitar/bass) and Koby (bass) are 16, 15 and 13 respectively), they’ve made a name for themselves busking in Melbourne’s Central Business District. These performances have become popular on YouTube, including a version of Metallica’s Nothing Else Matters that retains the original’s fury despite being played entirely acoustically, with Lars Ulrich’s drum parts performed on a series of upturned plastic buckets.

“We’ve been playing seriously and doing covers of The Offspring, Red Hot Chili Peppers and Metallica etc., since I was 10,” says Todd.

Such performances have caught the attention of bands like Scorpions and Foo Fighters, while The Offspring have promised to jam with MixedUpEverything next time they’re in Melbourne. The money is handy, too: in 2015 the band spent two months performing in Europe on their busking proceeds.

The band’s latest video features their version of Pearl Jam’s Even Flow, but MixedUpEverything don’t want to eke out the rest of their lives playing other peoples’ songs. “We don’t want to be known as this ‘sick cover band’ on Youtube,” says Todd. “We want to bring back good old fashioned kick-ass rock. No computers, no crap!”

And they’ve got the ambition: “We will be the next biggest thing,” says Todd. “Our main goal is selling out Wembley and our own Rod Laver Arena.”

The band’s debut album Ex Nihilo has been being mixed and mastered. Follow MixedUpEverything on Facebook for news of its release.

10 of the best rock bands from Australia