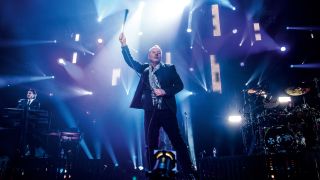 How do you prepare mentally and physically for a twenty-nine-date tour?

It’s hard, because people want to see you looking good – but not too good: “Those teeth look a bit new to me… And that hairline?” It’s about desire. People in Ipswich don’t care how the band had played in Inverness.

Do you understand what Classic Rock’s reviewer Stephen Dalton meant when he said Simple Minds’ most recent album, Big Music, saw the band “dressing towards their disco-rock side”?

No. That’s daft. The consensus was that we had referenced our early days but bridged that with something that was very current.

**The same review also said: “Simple Minds still sound like they have passionate messages to impart.” **

In that case I will cut Stephen some slack. As long as they mention our passion and our energy, reviewers can write what they like.

After sixteen albums, does it become difficult to come up with new ideas?

It’s happened to the greats. With us, ten years ago it felt like trying to get blood out of a stone. But since then we’ve made the band central to our lives again and the flow of inspiration returned.

2017 will mark the band’s fortieth anniversary. Are you already thinking that far ahead?

Yeah. There’ll be a documentary, a photo-book, and we’d like to release some new material, as well as giving the catalogue another once-over.

Did you follow the progress of your ex-wife Patsy Kensit on Celebrity Big Brother?

I don’t watch much TV at all.

What if you were asked to appear in the next series?

I’d politely sidestep. But I hope in a couple of years you don’t switch on and there I am on the screen.

The tour begins in Grimsby on March 27.