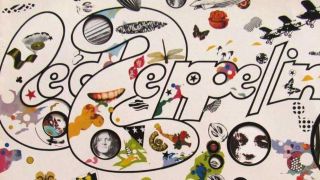 If you’d taken a stroll down the paint-flecked corridors of Kingston College of Art at the dawn of the 60s, you’d have brushed past many of the artists and musicians who were soon to shape the decade.

“It was a hotbed for talent,” recalls one of the college’s most celebrated alumni, known only by the pseudonym Zacron. “Mick Wayne, who played with David Bowie, and John Renbourn, who became that marvellous guitarist in Pentangle, were both at Kingston during that period. Jimmy Page had been at Epsom School of Art, but I first met him while studying painting at Kingston. His mother had an Afghan hound that used to sit on my lap in the front room of his house.”

The pair remained close when Zacron graduated to the Royal Academy in 1964, but as Jimmy Page stepped up his workload as guitarist with The Yardbirds, some time passed without contact.

“I was freelancing up in Leeds and living in the Yorkshire Dales,” Zacron explains of his situation in 1969, “and one very rainy night I decided to phone Jimmy to see where he was. I went to this rain-swept phone box, heard Jimmy’s voice on the other end, and was just about to say: ‘I’d be interested in working with you,’ when my voice was interrupted by him saying: ‘Where the hell have you been? We’ve been looking for you!’”

Led Zeppelin were already two albums out of the blocks by that point, with the flaming Hindenburg airship on their self-titled debut drawn by George Hardie, and the ‘brown bomber’ of II designed by David Juniper. Now, the band’s policy of changing their cover artist with each release meant Zacron was in the right place, at the right time, with the requisite talent, to win the commission for 1970’s transitional Led Zeppelin III.

He set to work. “I made it my dedicated task to produce a cover that stood out in the market – a design that had stature, just as the music did. To this day, the group don’t realise I went to every record shop in London and made myself an infernal nuisance by getting every cover off every shelf until I’d grounded myself with a thorough knowledge of everything on the market. There was a tremendous responsibility on my shoulders to create a design for what was then the number one rock group in the world.”

Drawing inspiration from the completed album as he worked in the studio, Zacron was also mindful of Page’s suggestion of a rotating cardboard disc that made a series of images, including shots of the four band members, visible through holes in the sleeve as it was turned.

“Jimmy came up with the idea that it could be based on a vegetable chart [i.e. a volvelle],” he says, “so his ideas and mine had that meeting point. In making a disc that rotates, you’re getting people to participate in the artwork in real time. In a way, it’s almost like graphic film-making.

“I was careful to get the images of the band members right,” Zacron adds, “and the photos were all taken at their houses, specifically for that reason. It was important to set up images which showed them as the giant force they were in music. John Paul Jones had a Greek god-like quality. John Bonham was a nice man – warm-spirited, humorous – but he had a strong face, and unless you got him to unwind you wouldn’t get the images you wanted.

"So I photographed him while he was eating cucumber sandwiches, which made his face fill out a little. Jimmy’s face came out of the Medusa, the idea of a Greek deity apparition with light folding around his hair and a grainy look to the face. Robert’s face is almost Germanic in the old, classical sense. Again, the hair is like writhing snakes, and the emblem around his neck is like a First World War Germanic cross – without the swastika, of course.”

Scattered across the rest of III’s gatefold sleeve was a series of objects apparently chosen at random: a walnut, a winged armchair, a corn-on-the-cob, a trio of biplanes chasing each other toward a giant dragonfly.

“Part of the revolutionary step the cover made,” says Zacron, “was to put elements together that hadn’t been put together like that before. Things flying in the air that don’t normally fly in the air. My indulgence was that I put in things that turn me on – wonderful things like biplanes, palm trees, emblematic birds, little bits of heraldic jewellery and cosmic geometry. The corn-on-the-cob has a very much zeppelin-like quality. I know Jimmy made a comment about that.”

Despite the laissez-faire attitude of the band, and label, there were two elements that Zacron was obliged to include amid the chaos.

“‘Led Zeppelin’ – the word – is written in the sky as if it’s hanging there like a zeppelin,” he explains. “And Atlantic Records had a special meeting to decide if their logo could be allowed to not be square on the page. I said: ‘Look, if I’m gonna have to use your Atlantic symbol, which is really rather alien to the rest of the design, then I want to choose the colour and position it in such a way that it looks like a component in the design.’ So they had a meeting and said yes.”

Perhaps unsurprisingly, given the intricate nature of the design and Zacron’s perfectionism, it took about four months before the artist was ready to unveil the Led Zeppelin III design to his paymasters.

“It took me a long time,” he says. “I think they wanted me to do it while I stirred the tea. But they had to wait, because it had to be really good. When I do an artwork, I prop it up on the side of the bath, I have it round the phone, I live and breathe the job. The group were very aware that it was taking a long time. There were stories [along the lines of] ‘Where the hell is the artwork?’, and I think Jimmy thought I went off with it. But he needn’t have worried, because I always come up with the goods.

“The last thing I put on was my own logo, on the inside,” he continues, “and then I was on the M1 from Yorkshire to show the design to [manager] Peter Grant. When I got to Peter’s office in Oxford Street, I said to him: ‘I’ve got a real surprise for you.’ Then I picked up a funnel, which was a loudspeaker for a new vaudeville band, and put it on his head, and he wasn’t allowed to take it off until I’d arranged the artworks.

When I took it off, he just went: ‘Absolutely fantastic!’ I think I was paid more for that design than anybody had been paid before. Which meant I could go down to the art shop and buy all the materials I wanted.”

While he has since blown hot and cold on the subject, it seems Jimmy Page was similarly enamoured with the sleeve at the time.

“Jimmy said to me on the phone from New York that he thought it was fantastic and that I should design all their covers from then on,” remembers Zacron. “But I think perhaps John Paul Jones may have reminded him they had a policy to use a different artist each time, and that won the day. As with all groups, you always get different points of view pulling in all directions, and that’s normal.

“The test of time has shown that the cover has endured,” concludes Zacron. “It’s been polled among the world’s top four album covers, and I think the three covers in front of it are there for cult appeal more than for artwork. Doing that design was a great opportunity, very exciting, and it has certainly helped to propel my work further.

"Out of that Zeppelin design has come the most amazing history of designs and graphic images, painting and sculpture, drawing, prints and photography. Since 1970 I’ve been living a kind of high-energy existence, working up to 17 hours a day. And I’ve got some major creative plans for the future."