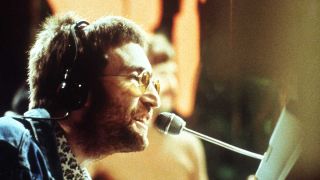 John Lennon’s solo career was already underway before the end of The Beatles.

As early as May 1968, Lennon was moonlighting with new love Yoko Ono. Issued two weeks before The Beatles’ ‘White Album’, the largely improvised Unfinished Music No.1: Two Virgins appeared to be a rejection of everything the record-buying public expected of him. The fact that it was adorned with a full-frontal nude photo of the couple only confirmed the notion.

Lennon’s post-Beatles work never quite reached the same avant-gardism, but it was just as wilful. John Lennon/Plastic Ono Band, released in 1970, was a sometimes brutal examination of the forces that both drove and tormented him. Imagine (1971) and Mind Games (1973) showed him to be a songwriter in the classic mould, envisioning a world without war, hunger, religion and the rest of it. You may say Lennon was a dreamer, but his lyrics often carried a bitter streak too.

The years immediately following The Beatles’ demise found him involved in a verbal spat with Paul McCartney, Lennon’s rancour all too apparent on songs such as How Do You Sleep? Then there was Lennon the political rebel, in Che Guevara cap and shades, throwing his weight behind any number of causes – women’s rights, penal injustice, Northern Ireland.

It was a stance that sought expression on 1972’s protest album Some Time In New York City and landed him in bother with the Nixon administration. After setting up home in the US in the early 70s, he found himself monitored by the FBI and threatened with deportation. Lennon wasn’t granted American citizenship until 1976.

By then he had retired from the music business altogether. Having signed off with a batch of old 50s and 60 tunes on the previous year’s Rock ’N’ Roll – he became a house husband, looking after his new son, Sean.

Lennon didn’t fully emerge again until autumn 1980, when he and Yoko returned with Double Fantasy. Tragically, just weeks after its release, he was gunned down in front of his apartment building in New York, aged just 40.

Inducted into the Songwriters Hall Of Fame in 1987, and the Rock And Roll Hall Of Fame seven years later, John Lennon remains one of the most significant figures in post-war pop culture.

Lennon’s first ‘proper’ post-Beatles album was remarkable for its candour and intensity. Primal scream sessions with US therapist Arthur Janov unlocked the ghosts in his closet, with Lennon addressing childhood loss (Mother; My Mummy’s Dead), the class system (Working Class Hero) and his disillusionment with 60s ideals (I Found Out).

Ringo Starr, Billy Preston and Phil Spector add accompaniment, but this is mostly all Lennon’s work. The musical backdrops are suitably raw too, ranging from spare acoustics to inflammatory rock with heaps of echo. It would prove to be the most confessional work of his life.View Deal

A raft of talent – George Harrison, Nicky Hopkins, Jim Keltner and more – were at hand for Plastic Ono Band’s richer-sounding follow-up. Mostly recorded at Lennon’s home studio in Ascot, Imagine is dominated by its title track, a visionary utopian dream that became the biggest-selling single of his career.

It also contains two of his finest romantic songs: Jealous Guy and Oh My Love. He hadn’t completely softened though. Gimme Some Truth, revived from The Beatles’ Let It Be sessions, is a caustic protest tune aimed at Nixon-era politicos, while estranged ex-bandmate Paul McCartney is the target of the withering How Do You Sleep?

Issued after the commercial failure of Some Time In New York City, Mind Games was a return to the less politically engaged, songwriterly feel of Imagine. However, the album sessions coincided with the onset of an 18-month separation from Yoko and the start of his relationship (at Yoko’s prompting) with the couple’s assistant, May Pang.

Some songs sound like the work of a man distracted by marital strife, while others – Out The Blue and One Day (At A Time) – deal with the lovelorn fallout. Lennon is at his most persuasive on the bucolic title track, its origins in the Beatles-era tune, Make Love Not War.View Deal

“If you listen to Walls And Bridges you hear somebody that’s depressed,” Lennon said some years later. “It’s a reflection of the time.” He was, in fact, in the midst of his infamous ‘lost weekend’, boozing the nights away with Ringo Starr and Harry Nilsson.

The self-hating Going Down On Love and bleakly beautiful Nobody Loves You (When You’re Down And Out), which he hoped Sinatra might record, give a fair indication of his malaise. These moods were offset by the uplifting US chart-topper Whatever Gets You Thru’ The Night (one of two tunes featuring Elton John) and the gorgeous #9 Dream.

A line from Chuck Berry’s You Can’t Catch Me, used in The Beatles’ Come Together, resulted in a lawsuit from publisher Morris Levy. Rather than go to court, Lennon agreed to record three Levy-owned tunes on an album of 50s and 60s covers that found him reconnecting with the music of his teenhood.

After the initial LA sessions were marred by drunken excess and producer Phil Spector ran off with the master tapes, Lennon finished Rock ’N’ Roll himself. The animated Slippin’ And Slidin’ and Stand By Me are standouts on an album that strikes a fine balance between reverence and pure devil-may-care.View Deal

Intended as a triumphant comeback after a five-year hiatus, Double Fantasy became a teary elegy following Lennon’s murder three weeks after its release. Its commercial success wasn’t down to sentimentality either.

Credited to John and Yoko, the album serves as a musical dialogue whose plain affirmations find an ideal contrast in the richness of the arrangements and Lennon’s sure songcraft. Woman and (Just Like) Starting Over were both posthumous No.1 singles, while Watching The Wheels and Beautiful Boy (Darling Boy) – written for five-year-old son Sean – documented Lennon’s extended bout of house-husbandry.View Deal

The hastily convened Plastic Ono Band made their live debut at the Toronto Rock And Roll Revival festival in 1969. The Lennons offered two distinct musical flavours. John and his band, including Eric Clapton, tore through a trio of old chestnuts, including Blue Suede Shoes, plus The Beatles’ Yer Blues and Bed-In anthem, Give Peace A Chance.

Most interesting, in light of Lennon’s heroin addiction, was the unveiling of a new song, Cold Turkey. Lennon admitted later that he was so full of junk that he threw up beforehand. Yoko’s two numbers, including avant-garde epic John, John (Let’s Hope For Peace), were less successful.View Deal

Easily the most undervalued album in Lennon’s solo canon, Some Time… is often dismissed as naive sloganeering. Yes, it’s flawed, but the mix of radical politics and ebullient rock‘n’roll is occasionally thrilling.

John and Yoko’s move to the Big Apple in September 1971 led to them embracing a number of social causes, reflected in controversial songs such as Woman Is The Nigger Of The World (which brought out the US censors in their droves), Attica State, Sunday Bloody Sunday and John Sinclair. The best moment, however, was New York City, a diaristic account of the couple’s life in their new home.View Deal

The productive sessions for Double Fantasy yielded 22 songs, but Yoko found the prospect of going through the unreleased material too stressful after her husband’s death. It wasn’t until 1984 that she revived the remainder as Milk And Honey.

Both Lennons shared the songwriting spoils. But John’s compositions were mostly unfinished sketches that he’d planned to return to early in ’81. Wisely, Yoko elected to leave them as works-in-progress, adding only a minimal amount of echo to his vocals. It lends tunes such as I’m Stepping Out and Nobody Told Me an air of immediacy lacking in Yoko’s more considered songs.View Deal