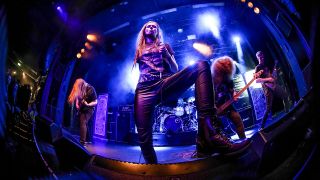 "We may not have invented the New Wave Of British Heavy Metal, or Norwegian black metal, but we are the birthplace of Mercyful Fate," one festival-goer tells Metal Hammer as he makes the case for Denmark's place in metal's history.

He has a point: Denmark perhaps isn't renowned for its contributions to the metal world in the same way as some of its Scandinavian neighbours are. But when Metal Hammer attends the metal leg of Aarhus' SPOT Festival, we discover a flourishing local scene fit to burst with talent, warmth and potential.

SPOT's main metal event is a Friday night showcase aiming to highlight the country's varied and inventive extreme metal scene. We have the best of Denmark's hardcore, death metal, black metal and more represented, and each of the performances prove that these bands can – and do – easily stand toe-to-toe with their global counterparts.

Opening tonight's showcase is Copenhagen-based hardcore group NYT LIV, whose debut album Ensomhedens Kolde Kald has been released earlier that day, meaning tonight's showcase doubles up as an album launch party for the four-piece. Fuelled by infectious energy, their blistering set gets the swelling crowds ready for a night of metal hijinks.

Second up are death metal squad Xenoblight, who play to a room now packed with punters who impatiently chant their name in-between furious blasts of noise. Their powerhouse performance, headed up by ferocious vocalist Marika Hyldmar, is made all the more impressive when you consider that this is, apparently, only their third show.

Atmospheric melodic black metallers ORM are up next, and their epic soundscapes stretch out and fill the room with glorious, glistening gloom. They inspire one man to headbang so hard that he discovers he's created a metre-wide clearing around himself when he eventually comes up for air.

One of the evening's main highlights come in the form of blackened hardcore noiseniks LLNN, whose visceral performance is mesmerising and compelling in equal measure. Intense and foreboding, their sludgy racket rattles through our bones long after they've left the stage.

By the time it's the turn of headliners Baest to take the stage, the venue is thick with anticipation. The Aarhus natives are tonight's hometown heroes and performing in the city for the first time in some months following a successful stint on the road.

Recently signed to Century Media, Baest's brand of death metal is polished and slick, and their performance follows suit. It's clear that this is a band on the cusp of something big. "It's classic death metal played by five young studs," an audience member comments with a wink. In terms of metal's next big contenders, you can firmly mark these guys down as ones to watch.

The festival's metal coverage stretches out over the weekend, and draws to a close with death metal upstarts Wayward Dawn, who prove that the future of extreme metal is in good hands.

But the weekend's true highlight comes in the form of a silent death metal show held by Aarhus group Livløs early on Saturday evening. The concept is used on a variety of artists during the course of the weekend, feeding an electronic drum kit and instruments directly into headphones rather than out through a PA, but when it's teamed with extreme metal the concept becomes a brilliant spectacle. Watching a silent mosh pit morph into a silent wall of death is a hilarious and surreal experience.

SPOT's metal showcase makes a brilliant job of highlighting the best that Denmark's metal scene has to offer. But what strikes Metal Hammer the most is the warmth that props up the scene from the inside out. Each band offers unwavering and enthusiastic support to one another at every performance we see. It's this that might just mark Denmark's scene out as something truly special.

SPOT Festival is held in Aarhus every year. Its metal showcase is set to grow next year – keep an eye on their official site for more information.