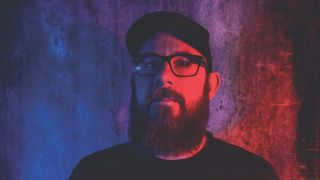 “If a show cancellation comes up, letting down the fans really gets to me, especially if there’s nothing we can do. You can’t explain to absolutely everybody and that sucks.”

“I wasn’t often in a place where people could offer advice; I had to learn a lot on my own and take a few arrows! People often tell you to stay true to yourself, and it’s something I do agree with. I’d give that advice to younger bands, and to recognise the value of hard work.”

“There are so many different ways you can be a rock star, really. The first time we got a tourbus, our first album… those kinds of milestones felt huge, but I don’t think anyone in our band has ever forgotten that it’s not long before we go back to reality again!”

“My dad got really sick and I found out he got cancer – I cried for days. We were supposed to be in Paris doing a promo tour and that was really difficult.”

Do you have anything special planned for In Flames’ 30th anniversary as a band?

“We haven’t ever really been a band that marked those milestones; we love our history and are proud of where we come from and what we’ve achieved, but we’re still hungry and eager to go to places we haven’t before, to do new things.”

Are there any moments that make you feel like a 30-year-old band?

“With so much going on it gets really hard to keep track of time! At the start; we were just kids in Gothenburg mixing musical styles we liked together and people just happened to like it. But I don’t know what I’d do without it – I’d be fucked if I was working in a factory or in a desk job!”

What’s been the most surprising thing about the impact In Flames have made on the music world?

“In the beginning we were pretty removed from everything else – it took some time for genres and movements to really pick up. Now we run into bands from the other side of the world that say we helped influence them. We even tour with some, like Trivium – they say we influenced them, but I think they also turned it into something that is entirely their own. That’s all we did too, you know? We took bands like Iron Maiden and German thrash/death metal bands to make our music; ultimately, that’s how genres evolve.”

In Flames can – and have – played venues of all sizes, from small clubs to arenas. Do you have any preference on the rooms you play?

“Growing up, when we told people we were gonna be in a heavy metal band they’d be like, ‘Sure, whatever you say’, so it’s very cool to play to those huge rooms in Gothenburg. But we would put in just the same amount of energy and commitment if it was a room with just one guy!”

What’s the craziest show you have ever played?

“We played in Mexico one time, but had a flight right after to go and tour Europe. We had to get a bus to Mexico City where we could board a plane, go home for like a day then go out again for another couple months. We ended up playing before the support band. We tried to explain to people, but they were not happy and our dressing room was by the stage, which meant we had to walk past a room full of really pissed people to get out and they started throwing shit and screaming at us as we were escorted out by security! Not fun, man.”

In Flames have toured with everyone from Motörhead to Five Finger Death Punch. What is your favourite tour memory with another band?

“Touring the UK with Motörhead [in 2005] was truly awesome – they’re a legendary band and they put us in front of a crowd who loved us. But we’ve also played with Megadeth, Metallica – meeting these people who you listen to, standing next to them is beyond any dream I could have had. I often have moments where I have to pinch myself!”

Published in Metal Hammer #335. The deluxe 20th anniversary reissue of In Flames’ Clayman is released on August 28