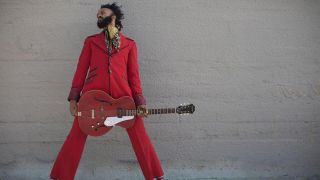 We called his last album “a major work of stunning breadth and originality”.

After the release of his debut EP in 2016, we proclaimed that it “should be his year”. Who is he?

Better known by his imminently-more-pronounceable stage name Fantastic Negrito, 2018 is the year you should take notice. New single Plastic Hamburgers is a blistering melange of blues riffs and righteous vocals with a video that explicitly connects him to the blues greats.

Watch it, if you don’t believe us:

His story is equally incredible. Xavier Amin Dph-ah fuck it, Fantastic Negrito is a multi-instrumentalist who was brought up in an orthodox Muslim household in Massachusetts as one of 14 kids. Drug dealing, hustling, and a deal with Prince’s management followed before he suffered a devastating car crash that left him in a three week coma. He emerged reborn.

But we'll tell you all that stuff soon. Meantime, here he is. Get involved.

Listen to his version of Leadbelly's In The Pines here: