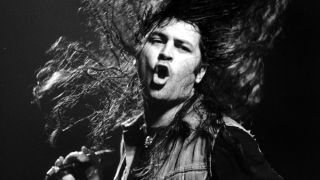 He hates reality TV, thinks rock is dead, is useless with money and sometimes wishes he’d gone to university, but, still, Ian Gillan has all the answers…

What’s the secret of your success?

The secret of success is being happy with it. And the best way to enjoy it is to do something you believe in. In 1967 I was offered a very lucrative role with a touring cathedral vaudeville act. I wasn’t sure if I really fancied it but it was £100 a week; I was on £10 a week. It was big money. But I turned it down because I was given some very good advice: success means nothing if your heart isn’t in it. Stick to what you do, what you believe in. Be true to yourself and if you’re good enough, success will follow. I’m content with who I am, the life I lead and the music I make.

[Long pause] I’m not great on regrets. I’m quite a positive guy. I would say my biggest regret is not going to university. I fell in love with music and took the scenic route through life. I think I would have got a lot from the university environment.

Okay, so you’re 18. You can have the life you’ve had, or you can go to any university. Which life do you take?

Yeah, I’ll take my life, thank you very much.

I do, as long you don’t include religion in that. I think God is within all of us. I’m writing a book called Infinity And God. What’s it about? Well, God and infinity. The clues are all there. Sorry, I’m being facetious. It’s such a huge thing, isn’t it? I’m not sure if I answer that properly in the book, so I’m sure I won’t be able to answer it here.

What are the best and worst drugs?

You’re asking the wrong man. I really don’t do drugs. I didn’t have a joint until I was 38. The best drug? Aspirin, probably. It’s derived from the bark of a tree, so you don’t have to chew on the branch of a willow when you have a headache. Which is always handy, I find.

What has been your lowest point?

Hard to say. You experience all sorts of peaks and troughs in your life. I think, essentially, good comes out of everything. Even bad times can be good times. And you learn from them. The bad times make you a better person.

All of it, really. Trying to pin it down to just one thing is pointless. I am useless with money. My manager gives me pocket money for sweets and beer. It’s the best way, believe me.

What’s the worst thing about being in Deep Purple?

The fact I have to leave my diary open – put my life on hold, essentially – for huge swathes of time because there may be a tour or some other huge commitment and I can’t do anything, I can’t plan anything, because something might be happening with the band. I do struggle with that but I try to keep it in perspective.

What can you do that no one else can do?

Let’s see… Well, I have been Charles Darwin in a Bolland Brothers concept album, Jesus Christ, and the lead singer in Black Sabbath. I very much doubt if anyone else has ever done that.

I’m apolitical. The whole political system drives me nuts. We get nothing done at all. Our democracy – supposedly the envy of the world – is ruled by minorities, people who shout the loudest getting the most influence. My dad worked in a factory. He was a shop steward, a big believer in the power of a union. My mother was a teacher, a very ‘small c’ conservative. As a kid I used to hear them arguing, and I learned from a very early age that if you took the best bits of what my dad said and the best bits of what my mum believed in, that was probably the best way forward. We don’t seem to have grasped that. Meanwhile, it’s as if every single argument or debate is reduced to grains of sand. It’s about time we woke up and realised we’re standing in the desert.

Is there a future for rock’n’roll?

No. It’s over. Rock’n’roll has been diluted so much over the past 40 or 50 years with each new incarnation that our notion of what it is today is simply not what it was. It has lost its meaning. I don’t mean that bands still can’t form and play and entertain – especially if they’re playing from the heart – but the spirit, the essence of rock’n’roll, is simply not what it used to be.

I think, like all things, it is time – it has finite life. What doesn’t help is The X Factor and all of these awful talent shows. I watch them and shake my head. We wouldn’t have made it through the first audition.

Still being a QPR supporter, I think. I haven’t been to Loftus Road for a while now, but I was at Wembley in 1967 when we beat West Brom in the League Cup final.

I became good friends with Rodney Marsh [former QPR player]. He came to see us a few times. He came to a Gillan show once, around 1982. “Great show,” he said, when he came backstage, “but it’s not Deep Purple, is it?”

I laughed it off, but it started me thinking. I called Jon Lord not long after that. We went out and had a meal and a chat, and the seeds of the Deep Purple re-formation were sown right there. So if you want to know who was behind that re-formation, blame Rodney Marsh.

For more on the Deep Purple star then click on the link below.