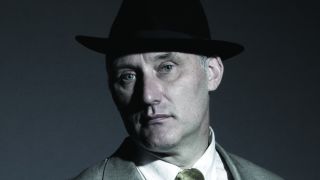 Having helped to define post-punk alongside John Lydon in Public Image Ltd, Jah Wobble (aka John Joseph Wardle) embarked upon a portfolio solo career of astonishing breadth and genre-diversity. As well as collaborating with Can, Eno, Bjork, Ginger Baker, Pharoah Sanders, Primal Scream, The Orb and countless others, he has led his Invaders Of The Heart since 1982 (apart from an alcohol-induced mid-80s ‘wobble’ that saw him take a long-term day job with London Underground) and authored the exceptional autobiography Memoirs Of A Geezer.

I did once, but my idea of God changed to a more pantheistic and interactive God. In the end I became a Buddhist.

People think I’m a dope-smoking, vegan, PC leftie, but I’m not. I’m left, but not a multiculturalist. I’m in a mixed marriage and like diversity, so I’m a pluralist. Mine is the urban cosmopolitan scene, but I don’t think you should promote difference.

Getting divorced. Not that I wish I was still with my first wife, but I consider that to be my biggest failure. I’m very happily married and have been for a long time, but I regret not being a bigger, nicer person years ago.

Who’s the most inspiring musician you’ve ever worked with?

Bill Laswell is a really great producer – he knows how to set a scene for you to work in. Youth’s really good at that too. Natacha Atlas, Bernie Worrell, Evan Parker, Pharoah Sanders… There are so many.

As Mark E Smith says: “No one takes a scruff seriously.” I do occasionally wear Adidas tracksuits. And I’ve got a Staffie called Tyson. But if I’m suited and booted, I notice people treat me differently. I’m sure that if I’d learnt to speak the Queen’s English a bit better I’d probably be twice as rich as I am now. I know people hear me speak and just think: “Oh, God. A chav.”

Going to see Tottenham play Real Madrid. Good flight, really expensive hotel, and Peter Crouch got sent off in the first two minutes. It’s like a fifteen-round heavyweight boxing fight where: ding-ding… smack! We’ve come all this way, we’re a minute in and we’re obviously fucked. That was quite a lot of dough.

How did the Sex Pistols experience change John Lydon?

Being around [Pistols manager] Malcolm McLaren changed him. He became like him, and then ran PiL with a similar element of largesse. He treated us the way McLaren treated him. He’d really liked McLaren and been abandoned – he didn’t give him any money and left him high and dry. It was a cruel rejection that really rocked his world.

What, if anything, did you learn about your fellow man while working on the London Underground?

I learnt how quickly you can process humanity and detach from it. I very quickly just saw passengers as a nuisance. Especially when I was train crew. Suddenly I saw them as this big, faceless mass. You deal with some unbelievably horrible people.

A real nuisance, hyperactive. I was always bright, and at primary school I was good, but at secondary school I just dropped away. I started to clown around and muck about. I was always in trouble, got caned a lot and finally got expelled, though that was a fit-up.

What was the worst decision you made while drinking?

Oh, Jesus, so many. I was reading Hemingway quite young and loved the idea of the wild man drinking – the romantic side of it. Though, basically, the word that best sums up blokes like me, who behaved the way I did in drink, is ‘inadequate’.

When I first heard proper deep reggae bass, there wasn’t any other instrument. It was visceral. I just clicked with it, knew what I wanted to do with it very early on. Seeing Family Man Barrett play with Bob Marley And The Wailers at the Lyceum in 1975, I recognised bass as a commanding influence. Just like when normally taciturn people speak and everybody listens, the bass has a similarly quiet authority.

I’d rather have a symbol than words. I paint geometrical shapes and patterns. I did the new album cover. It’d be my pattern, hopefully, so I’d go out with ego, expressing myself. But like the poem Dust In The Wind, that gravestone will go to dust, so all trace is lost. No matter what you put, all trace of me, us, will eventually be lost.

Public Image Ltd: This Is PiL