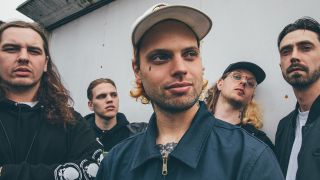 What a cracking time to be alive for hardcore fans.

Right now, the scene is overflowing with inspiring, boundary-pushing bands and we can add Higher Power to its swollen ranks. With a diverse sound that combines 80s metal influences, lush 90s alt and Alice In Chains sludge, doused in snotty Suicidal Tendencies’ attitude, they’re yet another example of a band who are putting their own stamp on the genre.

“I wanted a band that is progressive,” says vocalist Jimmy Wizard (yes, that’s his real name), speaking to Hammer from “somewhere in Germany”, where the Leeds quartet are in the midst of a ten hour drive back to the UK following a Euro tour with Backtrack and Hangman. “People always tell me it sounds unique, which is what I wanted. Hardcore is becoming way more popular but in the UK, there’s not many bands coming through. I feel like it’s the right place, right time to make Higher Power happen.”

Things are certainly falling into place for the Leeds quartet. The band’s debut, 2017’s Soul Structure, fizzed with potential and it wasn’t long before they were snapped up by major label Roadrunner – although, at the time, Jimmy fretted that they weren’t ready to take such a big step. “When we signed to Roadrunner, I didn’t believe we were good enough to be at that level, he says honestly. “We’ve always had some kind of hype around us, but I felt like we never had the chance to put in the time to really deserve it.”

That might have been the case then, but one listen to the band’s new second album, 27 Miles Underwater, proves that band are now exactly where they need to be. The writing and recording sessions were crammed in between a 2019 hectic touring schedule before they hit the studio with producer Gil Norton (Pixies, Foo Fighters) who brought out the best in them.

The record maintains its gut-punching grit but, with a more melodic edge, it sounds like a band writing whatever the hell they like with zero regard for genre limitations, and taking a leap forward.

“We’ve been a band for four and half years and we’re already releasing our second record on a major label,” says Jimmy. “It’s been a very intense, straight 0-100 journey so far. Before I never thought we had the songs to match the hype that we had. Now we have the songs to back it up.”