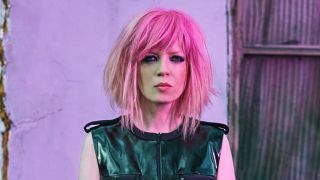 Plucked from obscurity after her future Garbage bandmates spotted her old band’s one and only MTV appearance, Shirley Manson quickly became the face of the mid-90s alt.rock explosion.

Twelve years later, with more than 16 million record sales amassed, the band quietly slipped away. They did so battered by record label demands and burnt out after spending the previous decade on a tour bus. They returned in 2012 with the excellent Not Your Kind Of People, and now they’re back again with Strange Little Birds, an album that finds Manson older, wiser and more comfortable in her songwriting skin.

Don’t get me wrong, the success of the band is one of the best things to ever happen to me, but the side effect of having a successful record is having people prying into your private life. That did not sit well with any of us in Garbage at all. We were almost embarrassed by it. We did not do well in that world. Some artists flourish in that environment and we did not.

If you could go back in time and give your younger self one piece of advice, what would it be?

Fuck all those bastards [laughs]. That’s the best advice I could have ever given myself.

Garbage began a five-year hiatus in 2005. Why was that?

We worked our arses off and it was never considered enough. All we would encounter was negativity from the labels who wanted more blood and for us to sell more records. I am so grateful we were able to stand back as a band and say: “This game, whatever it is, is fucking nuts.” It’s an abyss you can fall into or save yourself. And I feel, in the end, just before we went on hiatus, we saved ourselves from being destroyed by real corporate greed. That sounds dramatic but it’s true.

I was a dedicated, serious student until I went to high school. Then I encountered a very physically intimidating bully and I went off the rails in a multitude of different ways. I was very unhappy. I was battling all of these typical issues that a lot of young teenage girls face. I had very low self-esteem, I was being driven by my hormones and I stopped going to school.

What would you have done if you hadn’t gone into music?

I’ve joked about this with my friends – I’m not really fit for much else; I’m not very good at anything else. I was working in a clothing store for a long time, maybe I’d have done that. Maybe I’d have been a writer.

Is it easier for women breaking into the music industry today?

The most powerful entertainers in the world are female. But what I notice about them is all of these women are spectacular-looking and they all make really accessible pop music. I’m not knocking that, but I miss hearing from the weirdos. I miss hearing from the girls that speak quietly and you have to lean in to hear what they say, because I’ve found the ones who require some coaxing often have the most vital perspective because they’re voyeurs, not entertainers.

Have you had to fight record labels to avoid being packaged as a pop star?

We brought out our third record [2001’s Beautiful Garbage], and we were due to promote it the day before the September 11 attacks and then the whole world changed. Musical tastes changed and we were plunged into decades of, for the most part, sugary pop. All of a sudden we were an old-fashioned band that nobody wanted to hear from. Our record company were furious because they wanted to make money, so they wanted us to change our sound and they wanted us to compromise. We were not prepared to do that.

You live in LA now. What do you make of the political situation in the US?

I’ve made my feelings on Donald Trump clear. It bothers me when he’s making jokes and talking about the size of his dick when he should be talking about solving the problems of homelessness, starvation and unemployment. It makes me crazy.

Are you a religious person?

The logical side of me believes something created everything. What that is I don’t know, and I’m certainly not going to worship it. All humans want the same thing: we want to live freely, happily and live long. Beyond that our differences are so minimal. Religion takes these differences and magnifies them to the point where we can’t get along.

What are you proudest of?

My band. We’ve conducted ourselves with a lot of integrity and we’ve survived, made good records and have not been corrupted.

The meaning of life is to want more life. I don’t think there is a meaning per se though. We’re all meaningless, and the sooner we all accept that the better.