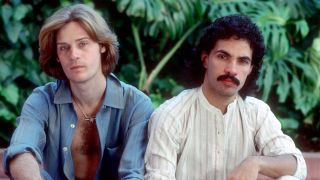 The problem with reporting on Hall & Oates, especially for grizzled rock journalists, is that they hardly ever get into trouble. Oh sure, they met while running from a hail of street-gang gunfire back in 1967, but that's really where the rock’n'roll chaos ended. Still, they are largely unsung superstars with a raft of monster hits spanning five decades, and even if they never developed drug habits or killed anybody, they clearly deserve a spot in the Hall of Fame.

Darryl Hall and John Oates both attended Temple University in Philadelphia together. Raised on doo-wop and R&B during the heyday of Philly soul, the two musically compatible schoolmates formed a vocal duo and spent their first few years (and albums) figuring out what, exactly, they were up to.

They straddled rock, pop, and folk before finally settling into the “rock and soul” formula they became known for. Darryl played the guitar and sang. John played the bass and sang and cultivated the most iconic moustache in rock’n’roll. No one took them particularly seriously – album titles like Abandoned Luncheonette (1973) and album covers that airbrushed them into drag-queen territory (the ‘Silver Album’, 1975) didn’t help - but by then the hits started trickling out, establishing these two mild-mannered oddballs as major players in the wild and wooly world of 70s rock.

(Speaking of oddballs, it does not get any weirder than Hall & Oates’ ‘73 promotional video for their first hit, She’s Gone. They look like two stoned glam-rock serial killers confessing to crimes they barely remember. It’s heavy.)

They were back to their old sound a year later, however, and the next few years found the fellas knocking out some seriously AM radio gold:

Grounds for Separation (1975) was almost the theme for Rocky. (Also, Sweet might’ve ripped off the lyrics for Love Is Like Oxygen.)

The hits dried up in the late 70s and Hall & Oates reinvented themselves as silky, new wave-inspired pop crooners. Its was a gamble that paid off huge dividends for them, the band racking up an impressive pig-pile of headache-making hits that rocked malls and county fairs for decades.

As this, after all, is Classic Rock, we’ll spare you the indignities of reliving Kiss On My List, Maneater, Adult Education and I Can’t Go For That (No Can Do) again, but they did have one more hit at the dawn of the 80s that harkened back to their heyday: the thoroughly life-affirming You Make My Dreams Come True.

Hall & Oates slowed down significantly in the next decade and 80s burnout assigned them to the “Where Are They Now?” files. The fellas spent their time releasing solo records and generally being decent dudes. They were eligible for the Rock And Roll Hall of Fame in 1997, but at the time, everybody just shrugged. “The Private Eye guys? No thanks,” laughed the muckety mucks at the HOF, presumably.

What ultimately thrust Hall & Oates back into the public consciousness was the internet, a place where you can admit just about anything anonymously and there’s at least a decent chance you won’t get publicly shamed for it.

And so it was for a vast generation of younger music listeners, un-moored from the rigid sub-cultural sub-divisions of their parents, who began to confess that some of their favourite musical moments growing up were when Hall & Oates came on the radio, brightening their days with their effortlessly breezy blue-eyed soul.

Even then, there’s still a caveat – no one’s going to admit, publicly or otherwise, to an affection for their streak of 80s mall-pop hits – but slowly, surely, over the past decade, people came around to Hall & Oates’ way of thinking.

They’re still not cool in the way that, say, the MC5 or Otis Redding is cool, but at least people have warmed up to the fact that Hall & Oates have, indeed, played a significant part in adding new sounds and colours to the ever-shifting tapestry of rock’n’roll.

Perhaps more significantly, there’s is a legacy of unparalleled good will, especially for a band coming of age during a turbulent decade of money, groupies, drugs, mayhem, punk rock, and wholesale nihilism. Their music did not inspire pain, punishment, lust, arson or depression. Instead, they provided the soundtrack for your best moments: first dates, proms, weddings, anniversaries, anything involving blue skies and warm breezes.

And while that may lack the grease-painted, grungy sensationalism of some, it is no less important to the millions of people who’s lives were touched by this unlikely duo from Philadelphia.

Every once in awhile, it’s nice to thank the good guys, too.