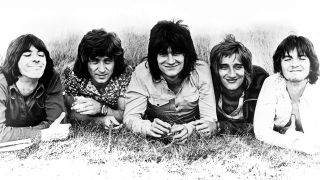 Sadly, this, the Faces’ greatest moment on record, was the beginning of the end.

Eclipsed by Rod Stewart’s burgeoning solo career (Maggie May hit No.1 just weeks earlier), the band had finally transferred the bloozy bonhomie of their live shows to the studio, serving up such irresistible items as Miss Judy’s Farm and, somewhat prophetically, Last Orders Please. Best of all were Ronnie Lane’s gorgeous ballad Debris, and the rambunctious Stay With Me which gave the Faces their first hit. RH

What they said at the time: “A Nod… is about entertainment, fucking, partying, nostalgia, and finally, the idea of fun itself.” Creem

Forty-five years on, how do you feel about A Nod Is As Good As A Wink?

Kenney Jones (drums): Out of all the albums we did, I think that one best summarises the Faces. I was at Olympic [Studios] last week with [producer] Glyn Johns. We were having lunch. They’ve turned it into a cinema now, and a restaurant, and God knows what. It brought lots of memories back.

The Faces were famously wild on stage, but what were you like at those sessions?

Just the same. There was a pub just up the road from Olympic. Any excuse, y’know? I think it helped to get us in that relaxed-drunken-stupor mood that we always preferred to be in.

Do you hear modern bands trying to replicate the feel of that album?

Yeah, all the time. Bands trying to sound as sloppy as we did. It’s quite simple: we were too pissed to play any other way.

As a drummer, how hard was it to keep things tight in those sessions?

It was tough. Especially because everyone was taking speed, of one kind or another. So tempos went up and down according to how many days’ sleep they’d lost and how much speed they’d had. So it was very difficult for me to balance the two issues. Click tracks? No, no, no. Rod [Stewart] would stand in front of me and turn his hand around, like, “Faster…”

Any funny stories from the sessions?

One day, Ronnie Lane comes into the control room saying: “Kenney, I’ve just smashed into your car.” We all started laughing: “Yeah, go on, pull the other one.” He’s laughing away as well. But he says: “No, I’m serious.” So I ran downstairs. Ronnie Lane was driving a Land Rover in those days. I had one of the first Ferrari Dino Spiders. Red. I paid six thousand pounds for that, brand new, in 1970. And there it was, with the tow bar right up the front of it. Smashed. He’d just reversed up all over it. What could I do? It was Ronnie, me old mate. I gave it to the roadie. I said: “This one’s broke – get me another one!”

Which are your own favourite songs from that album?

Miss Judy’s Farm, that’s a good track. You’re So Rude is wonderful. Last Orders Please: that summarises the Faces’ drinking habits. But it’s got to be Stay With Me. It’s such a blinder, such an ‘up’ song. Woody’s intro is stunning. No one else can do that. Even when I do it with my band, y’know, we can’t quite get that intro right. You’ve got to be Ronnie Wood to do it.

Rod wrote in his autobiography that the album doesn’t do the band justice.

Basically, at the time, Rod was doing his solo albums, so a lot of the good stuff went on those, and we were left with the songs we were knocking up at the time, y’know? But we made them sound great, so there you go. Rod was in incredible voice, all the way through that period. And still is. I mean, he sings a semi-tone down now, but most people do.

The title is a mouthful. Who came up with it?

I can’t remember. I was thinking about that the other day. I think it must have come from Monty Python, from memory. Y’know, nudge, nudge, know what I mean? A nod’s as good as a wink…

The album was originally issued with a poster of the band frolicking with naked girls.

Yeah. We all wanted to do that, every minute of the day.

Have you still got a copy of that poster?

[Laughs] I thought you were gonna say: “Have you still got one of those girls?” Yeah, I’ve still got a copy.

Could last year’s Faces reunion ever lead to something more permanent?

Yeah, we’ve been trying to get together for years. We were talking about doing something in September again, and maybe next year doing a more lengthy tour. But the Stones always got in the way of everything. Every time Rod is available, the Stones go out. That’s kind of delayed it.

I started it off about four years ago. We had this idea of getting lots of classic cars together. When we did the first one, we had the most Ferraris ever assembled anywhere in Britain. Then we turned it into a charity event for prostate cancer. About three years ago a mate of mine introduced me to another guy and said: “He’s got an idea to raise money for prostate cancer. He’s dying of it.” He was such a nice guy that we had several lunches over a period of about eighteen months. I said: “I’ll do it.” I didn’t know at that time, while he was educating me about prostate cancer, that I had it all along. Everything happens for a reason, I think, in life.

How serious is prostate cancer?

One in eight men will get prostate cancer. One man every hour dies of it. This is a weird one: one in every four black African men will get it. They’re twice as likely to get it. Nobody knows why. I’d say once you get over thirty-five, get your prostate checked every year. When I was sat in the waiting room to have treatment, I was amazed how many young guys were in there.

What can we expect in terms of the line-up for Rock ‘N’ Horsepower?

We’ve got the Boomtown Rats. Bob Geldof did it once before as well, and he turned up in a snakeskin suit that he got made in Brick Lane. We never know who’s gonna turn up on the day. It’s all a surprise. That’s what’s nice about the day. But we’ll certainly do some Faces tunes. HY

Rock ‘N’ Horsepower is at Hurtwood Park Polo Club on June 18, details at www.hurtwoodparkpolo.co.uk/events/rock-n-horsepower. For more info on prostate cancer, go to www.prostatecanceruk.org