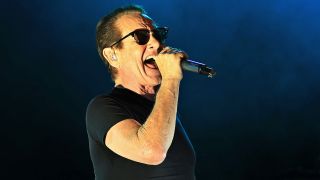 Graham Bonnet’s career began during the 1960s with The Marbles, before he joined Rainbow for one album. The singer’s run with the Michael Schenker Group was cut short after he drunkenly exposed himself on stage in 1982. The following year he formed Alcatrazz with Yngwie Malmsteen. Bonnet has worked as a solo artist as well as alongside numerous guitar heroes.

You’ve been involved in so many projects, is the Graham Bonnet Band a bona fide group?

Absolutely. Last year we released an album [The Book] that was pretty well received. However, Conrad Pesinato is no longer our guitarist. I’m sad to see him go but the record company didn’t like him. They expected a Steve Vai or Blackmore type, and Conrad isn’t one of those show-offs. We’re rehearsing now with his replacement, Joey Tafolla.

A brand new two-song EP, that features a Russ Ballard-written track called My Kingdom Come, is released for the tour.

The song’s maybe five years old. It’s heavy, but it’s like something Queen would have done.

EZoo is more of a project though, right?

Yeah. We’ve just released an album [Feeding The Beast]. Most of its tracks were recorded a few years ago, though it’s a brand new album as far as the public is concerned. It’s just a studio project, though, because the Graham Bonnet Band is very important to me.

On the upcoming dates will we hear mix of everything from your career so far?

It’ll be a bit of it all, yeah. There will be some solo stuff and songs by Rainbow, MSG and Alcatrazz. You can all sing along – it’ll be karaoke time.

You’re playing in your birthplace, Skegness.

Yes I am. We did that place [The Suncastle] on my last UK tour and I met up with old school friends, family members and former bandmates. It was such a great night that I’m going back.

You’re playing at the Ramblin’ Man Fair too.

I don’t know anything about that. What is it?

You’re part of Schenker Fest in November. How was it, reconnecting with Michael Schenker?

It’s been bloody great. It felt fantastic to go on stage with Michael and stay there for more than five minutes, after what happened all those years ago in Sheffield! [The exposure incident that saw him fired.]

Yeah. And although I suppose we now play mums’ and dads’ music, the audiences range from eight to eighty, and they respond to the fact it’s completely live. This isn’t Mariah Carey; we don’t need a troupe of dancers as a distraction.

Not at all. [At the shows in Japan] it was like a brotherhood. Gary and Robin have no ego whatsoever – they come on stage [during my segment of the show] and sing backing harmonies for me. All of my stuff is frickin’ harmonies, and they volunteered to do it. That meant a lot to me.

Could there be an album featuring everyone?

It’s not something that’s been discussed, but if Michael made the suggestion, that would be great. The Three Tenors – I wouldn’t mind that. We could be The Three Fivers [laughs].

The tour ends in Buckley on July 30.