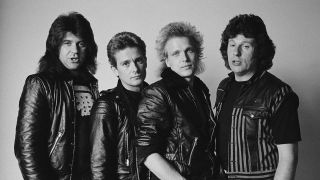 In issue 249 of Classic Rock we explore the Deep Purple family tree from root to branch, from Rainbow to Baby Face, Episode Six to Warhorse.

We also speak to four singers – Gary Barden, Graham Bonnet, Robin McAuley and Doogie White – who've joined Michael Schenker on his current tour. For some, reuniting with the guitarist has involved the rebuilding of bridges that had less been burned than turned into post-apocalyptic ruins.

Like Bonnet, who joined the Schenker organisation in 1982, fresh from chart topping success with Rainbow and solo, and whose swift departure came in the wake of one of rock's most infamous onstage meltdowns.

Below, we tell the story.

Graham Bonnet’s brief tenure with MSG is remembered as much for the farcical nature of his exit as for the great album he left behind. As he says: “I really made a fool of myself.”

He came to MSG with a big reputation. As the singer for Rainbow, his powerful voice had lit up their 1979 album Down To Earth and its two great hit singles: Since You Been Gone and All Night Long. After leaving Rainbow he had another hit as a solo artist with Night Games. “The funny thing,” he says, “is that I never wanted to be a heavy rock singer.”

Bonnet had first tasted fame as one half of 60s pop duo The Marbles, who’d had a Top Five hit with Only One Woman in ’68. Then in the late 70s, he had two solo No.1s in Australia with MOR versions of songs by Bob Dylan and the Bee Gees. Famously, Bonnet had never heard of Rainbow before he was invited to audition for the band. It was the same with MSG – even after he had been mixing with rock musicians for three years, he says, “I didn’t know who Michael Schenker was.”

His introduction to Schenker came via Cozy Powell, MSG’s drummer, who had played alongside Bonnet in Rainbow. But within a few weeks of joining MSG, Bonnet was shocked when Powell left to join Whitesnake. “He gets me in,” Bonnet laughs, “and then fucks off. Cheers, Cozy!” As a result, Ted McKenna played drums on the album Assault Attack. “It was a time I don’t remember too well,” Bonnet admits. “I was drinking heavily. A lot of the time I was semi-conscious. I thought that drinking made it better. That was my downfall.”

What came out of that marathon piss-up was a fine album, much of it heavy, but with a great pop-rock song in Dancer and a glorious epic in Desert Song. It was after the album was completed, in 1982, that the nightmare at Sheffield University unfolded.

“We’d all been drinking that afternoon,” Bonnet recalls. “By show time I was obliterated.”

The trouble started as soon as the band got into the first number. As fans pushed against the stage, Bonnet was horrified to see his sheets of lyrics, which were taped to monitors, being crumpled and torn. “I swore at the audience for fucking up my lyrics,” he says. “They shouted back: ‘You cunt!’ And then the fly on my jeans split, my dick fell out, and of course the dick became part of the act. I said: ‘Here it is,’ wibble-wobble, ‘see ya!’ And I walked off.”

Schenker says he didn’t see any of this. “I was playing, and then I looked to my right and there’s no singer. So we ended up playing the whole show without Graham. And I never saw him after.”

What Bonnet recalls, as best he can, is a roadie telling him backstage: “They’re gonna fucking kill you, Graham. Get the hell out of here.”

Bonnet retreated to the band’s hotel, and quietly slipped away the next morning on a train to London, where his manager told him he had been fired.

After that there was no contact between Schenker and Bonnet for 26 years. Schenker says evenly: “I was never bitter about Graham. I don’t hold grudges. I moved on.”

For Bonnet, what happened that night in Sheffield was the lowest point of his career. “I have now been sober fifteen years,” he says. “Thank God I’m not that guy any more.”

Read more about the Michael Schenker's four singers – and about the Deep Purple Family Tree – in Classic Rock 249, on sale now at all good newsagents, or available directly from us.