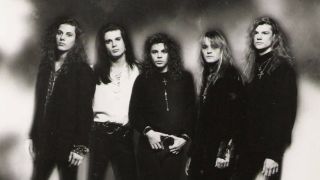 “I need a fix that fits, baby” - Sweet Addiction

The flash metal gold rush of the late 80’s became so crowded with cookie-cutter spandex-abusers that the slightest deviation from the norm could be a game-changer. Like Blackie’s ridiculous buzzsaw codpiece, Rachel Bolan’s even more ridiculous nose/earring combo, or Stryper’s, erm, strypes.

And so it went with The Front. Front main-man Michael Franano was way too complicated for the glam metal doofuses. He was like a Morrison-esque dark wizard with a sex-goth twist. The cat was deep. So he wore roses in his hair, not unlike Lynch-ian pop star Lana Del Rey does now. The Front were from Kansas City, man, they didn’t know or care about the twisty macho-crossdresser rules of the Sunset Strip. I don’t think ‘the kids’ were ready for a ring of roses.

That’s got to be it. Otherwise I have no clue why The Front’s 1989 debut album didn’t make a bigger splash. It’s one of the best records of the era. Imagine Billy Idol singing for The Cult. That’s what’s happening on it. And here’s the most important part: everybody talks about how grunge killed glam. It did. Glam deserved it.

The Front formed in the mid 80’s somewhere. Like a lot of the big-beat goth bands they sorta resembled (Mission, Cult, Sisters, etc) they derived a lot of their look and sound from the 60’s garage rock wave and the brooding death-hippie buzz of The Doors. Making their bones in Kansas City allowed ‘em to grow up weird without the confining genre-norms of LA or New York bands.

What eventually bubbled to the surface was a sound that bared some resemblance to the chest-thumping roar of the arena-glam bands, but seemed hipper, smarter, less prone to cloying power-ballads or wanky guitar solos. Flash metal for the cool kids. Naturally, the major labels caught wind of their fresh new sound and yet another ridiculous bidding war ensued, with Columbia Records ultimately snaring them.

They recorded their first album with producer Andy Wallace, who was a big deal at the time, having either engineered or produced albums for The Cult, Slayer, and Run DMC. Wallace eventually figured out how to make albums sound like the 90’s (he mixed Nevermind and produced La Sexorcisto), but he had no clue how to sound like the future in ‘89. So like a lot of records from the era, The Front is hobbled by a mix that is all thwacking drum beats. Wallace froze this motherfucker in 1989, a bad move for a band that was supposed to be five years ahead of its time. Still, it sounded great in the moment, and the songs still shine through.

The Front is filled with huge, radio-ready, pop-metal gems. Opener Fire and Sunshine Girl are both ridiculously catchy, speckled with psychedelic pop flourishes but built on a sturdy 70s classic rock foundation. Ritual takes the Doors worship to ecstatic new highs, a wobbly sex-throbber of a jam. Le Motion is a slinky jet-screamer, Sister Moon is all tambourines and twirling hippie chicks, In the Garden is everything overblown latter GN’R epics wanted to be without the dolphins and the megalomania. You get the drift. The album is a stone-cold classic.

In the wake of The Front’s release, the band toured with their closest kin in the flash metal world, our old pals Bang Tango. They also spent some time on the road with Alice Cooper and Lenny Kravitz. Fire charted for a minute or two, and the video saturated MTV for a couple months. Things were looking up. And then…nothin’. Despite all the heavy touring, the MTV rotation, the buzz and the hype and all the dollars burned in their name, The Front just never caught on.

A couple years later, in the wake of Nirvana-mania, the label dropped them and left them to limp back home to Missouri. Sort of. What actually happened is they just jumped ship to Epic, changed their name to Baker’s Pink, and released another debut album in 1993. It’s also great. And it also sank like a stone. But who cares? Franano kept things rolling along just fine over the next couple decades. He’s done soundtrack work, released a solo album under Michael Moon, and recently released a live Front CD from a 1990 show. He seems fine with the way things worked out. He probably doesn’t even regret the ring of roses. I’m still a little bitter about it all, though. I really fucking hated Candlebox.

Next: Crackin’ that whip with Impaler