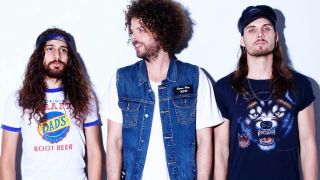 New Crown is the third album by psychedelic Australians Wolfmother. It rather took us by surprise when it was released last month.

Wolfmother? That Australian band that were like Led Zep on the brown acid, you mean? I thought they were dead. They were. It’s an Easter thing. The original line-up that released the self-titled debut in 2005 and successfully cashed in on the White Stripes blues explosion split up back in 2008 citing “irreconcilable personal and musical differences” – presumably more personal than musical since you can’t imagine much argument breaking out at the band meeting where somebody suggested they make another million-selling tribute to Physical Graffiti. Still, frontman Andrew Stockdale continued the band with a variety of line-ups before releasing the mooted third album Keep Moving under his own name last March and promptly declaring Wolfmother finished forever.

He didn’t fancy waiting the requisite five years before reforming, then? More like five months. Perhaps the wolfmother was at the door.

And this is one of those surprise no-publicity online self-releases that people like Pharrell, My Bloody Valentine, Beyonce, Jay-Z and Radiohead are doing these days? Kind of. When Beyonce and Radiohead self-release a surprise album online it’s because they don’t need the publicity. When the likes of Wolfmother do it it’s because they can’t afford the publicity. Hence there was a youtube trailer of the album last year and a rough demo version of the album hit SoundCloud last December. Although we didn’t know exactly when it would arrive, it was as unexpected as David Walliams joking about the parentage of Eric Cowell on national TV.

Still, New Crown, eh? That suggests a celebrated and radical departure, the coronation of a revolutionary new mindset, a total stylistic regime change! You’d think, huh. No, for the first twenty minutes of New Crown we’re firmly back in the loincloth and howling at the summer moon, albeit with a refreshed vigour on the rabid garage clatter of How Many Times. If anything’s new about the psych blues meteor storms of Enemy Is In Your Mind and Heavy Weight it’s a sense of long-awaited relevance in the shadow of The Black Keys, Band Of Skulls and The Family Rain. Even a stopped clock, and all that.

So Madame Innovation has floundered her charms elsewhere once more? Not entirely. Once Stockdale has wailed and buzzsawed his way through meaty five-minute hunks of Zep beef on the title track and Tall Ships, he cuts a little loose and gets playful on an album-saving side two (in old money). The frantic Feelings is two minutes of wonky Ween-ish grunge that sounds like it was knocked off pissed in the back of a speeding freezer truck tearing for its life through downtown Detroit and I Aint Got No is essentially The Stones’ (I Can’t Get No) Satisfaction having an emotional breakdown. She Got It is a cracking Hives impression and Tangerine Dream fulfils every fantasy you’ve ever had of Queens Of The Stone Age covering Badfinger.

Do say: Back with more bite

Don’t say: A bit more brown acid and they might rival White Denim