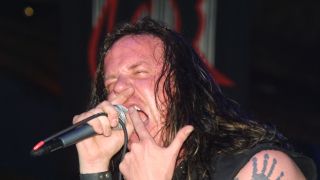 Los Angeles, California is, for some, what passes for heaven on Earth. The Western Paradise is a sun-kissed wonderland of impossibly gorgeous supermodels cruising the boulevards in state-of-the-art gas-guzzling cars on their way to sip fruit juice in the bar of the Standard on Sunset or shop on Rodeo Drive.

The 21st century arrived in LA a decade before the rest of the world, and they are already looking back at us from a radiant future. The flip side, for most Angelinos, is a decaying cash-starved city where the hyper-rich isolate themselves from the teeming impoverished masses in gated enclaves guarded by quasi-fascist private cops, and outside is a Mad Max-like badland of armed gangs and a militarised LAPD. The other future, the collapse of civilisation, can also be found here.

Few albums orchestrate this terrifying dark-side LA as brilliantly as Fear Factory’s Demanufacture, written, recorded and released in the wake of 1992’s devastating race riots that followed the acquital by an all-white jury of three cops accused of beating black motorist Rodney King.

The album is like the flip side to all those sunny optimistic West Coast albums from The Beach Boys’ Surfin Safari in the early 60s to the bouncy upbeat So Cal punk of today.

Demanufacture is about a guy getting by in a world that is out of control. Despite all the cyberpunk trappings, the essence is a story of just getting by from one day to the next. The opening blast of the title track is a heavy statement of despair: “Desensitized by the values of life/Maligned and despaired by government lies/Revenge is so strong/I taste it on my tongue/Your gun will be/ Your angel of mercy.” Like the movie Falling Down – a favourite of vocalist Burton C Bell – it both sympathises with, and is appalled by, the nut job who walks around blasting random passers by away with a gun.

“LA was just a hotbed of riots. There was so much racial tension,” says Bell, remembering the long toxic summer that gave birth to the album. “It was hot. Nobody was getting along. My life, personally, was a struggle of going to work and trying to survive and do the music as well. I was reading a lot. I was really overloaded with stuff about the state of the world. Here I am living in a one room apartment with four other guys. Is this how it’s supposed to be? Do I care? No, I’m desensitised to it. I’m desensitised to a guy walking down the street brandishing a gun. I’m desensitised to the fact that there’s a corrupt police department in Los Angeles and no-one can trust the police. That was what my life was about. And that is what is reflected in all of those songs.”

After 14 years of living in LA, Bell eventually relocated to New York, a city “with its own kind of pain” as he describes it. But he insists that while New York is an equally futuristic and insane place, Demanufacture could only have come from LA.

Fear Factory had already made the world of metal sit up and take notice with their 1992 debut Soul Of A New Machine, an ear-scouring half hour of grindcore-influenced hardcore/death metal. You can hear the frustration and the anger, and the sheer ambition of Fear Factory in that record. But the band were desperate to push forward, to go beyond that sound as quickly as possible. New avenues were opened shortly afterwards when they sat down with fellow Roadrunner artists Frontline Assembly, a Vancouver industrial duo formed by one-time Skinny Puppy man Bill Leeb. Leeb and his partner Rhys Fulber were to produce a remix album of Fear Factory songs called Fear Is The Mind Killer.

“There weren’t really a lot of these things around at that time,” says Burton C Bell. “There was Nine Inch Nails’ _Broken and Fixed_, Godflesh had done one and even Megadeth tried a remix. I was blown away when I first heard it. It really enthused me. I was an industrial fan to begin with, more than I was into death metal. I heard those beats and I thought we should really do stuff like this.”

By the time they came to record their second studio album, Fear Factory had progressed so far beyond what they had recorded on their debut that they actually sound like a completely different band.

“It was a development process from Soul Of A New Machine. A lot of those songs we had already recorded on the three demos we had done in the year and a half before we were signed. We were still learning about writing, and we were exploring the nature of the melodies that I could do and Dino [Cazares, guitarist] was also influenced by the melodies as well. He wanted to write textures that I could sing on top of. We started to experiment with keyboards and industrial sounds due mainly to the influence of Frontline Assembly.”

The recording process was a near disaster, mainly due to the fact that the band and their appointed producer Colin Richardson didn’t exactly see eye to eye.

“We wrote all the songs and arranged them before we went into the studio. Colin Richardson was producing Demanufacture and Colin’s idea of producing an album is putting his name on it,” says Bell. “Nice guy, I don’t hate him or anything… but it is what it is. Fear Factory produced that album.”

The team-up with Richardson was because both band and producer at that time shared a manager, namely Laura Richardson, who was also the producer’s wife.

“During the entire recording process there was a conflict going on. He [Colin] was comfortable around us, but she was creating this feeling of animosity. I still see her around but I don’t even like to talk to her… that conflict translated into the album, the sound and the energy. It sounds so cold and mechanical because that’s how it was recording it. We were away from home. We started in Chicago, and as soon as we got there things started going downhill. The staff at the studio were all druggies, this guy Wesley Willis would come in and annoy the hell out of me. He was like this huge guy who wasn’t playing with a full deck of cards, and they released albums by him in Chicago. Nice guy, but he was annoying the hell out of everyone. And it turned out that none of the left side of the drums had actually recorded. We thought, ‘Fuck this’.”

There was a delay as the band and producer relocated to Bearsville [in Albany, upstate New York]. The band drove up, stayed with a friend and rehearsed every day in the basement with a small PA. They went there prepared. But things continued to degenerate.

“Dino and Colin started fighting to the extent that Colin would have nothing more to do with him,” says Bell. “I was like, ‘Fuck’. Our hands were tied, we’d spent a lot of money, Colin was contracted to do the mix, we really had no other choice.”

Bell flew to London to finish recording the vocals at Whitfield Street Studios. Returning to LA with a mix, the playback met with a flat reception.

“Nobody liked it. It wasn’t the performance or the songs. So at that point we got [Canadian producer] Greg Reely to come in and save the album. So Greg arrived at Enterprise Studios in Burbank, LA and it was then that we discovered that Colin Richardson had erased all the drum tracks. All gone. That’s why there are no toms on the record. That’s why the sound is so cold: it was originally going to be a much rawer and more natural sound. But Greg and Rhys really brought that sound out and that really created Demanufacture right there.”

Although they were happy with the result, there was a sense of weariness about it.

“I didn’t really have high expectations for it. I thought that with Roadrunner behind it, it would do as well as Soul Of A New Machine. The success really surprised me. The fact that a lot of people say that it’s one of their most influential records, I just think, ‘God, if you knew what we went through to make that record’.”

The inclusion of Zero Signal on the million selling selling Mortal Kombat soundtrack helped, but it also somehow tapped into the times. In the mid 90s, the cold war was over, but if anything, having removed the threat of two nuclear superstates waiting to unleash a global holocaust, the world seemed a less secure place than it ever had been before. New technologies from the internet to cloning were opening up new possibilities, not all of them good. Everything about Demanufacture from the steely machine-honed sound to the awesome half-barcode half-ribcage cover painting created a perfect statement of the new techno-paranoia.

Musically, Fear Factory helped to define a new aesthetic in metal: although they could hardly be described as a nu-metal band, they were probably the band after Rage Against The Machine that most of the lumpen nu-metal drones of the late 90s most wanted to be. While nobody would want to blame them for Limp Bizkit, Demanufacture did create a template that a lot of other bands would later use cookie-cutter style on their own albums.

“I guess I’m too humble to say that this record influenced other bands,” says Bell. “I hear aspects of it. I hear a guitar sound, or a drum trigger, or in vocals in a lot of different bands. A lot of bands like that Danish band Mnemic, I think sound a lot like Fear Factory. I don’t think that’s a bad thing.”

Demanufacture appeared at a time when ‘industrial’ music was deemed to have been washed up, despite the undeniable success of isolated cases such as Nine Inch Nails and Ministry’s Psalm 69.

“Sometimes I wish that we had made this album when Ministry made The Mind _Is A Terrible Thing To Taste _in 1989. Maybe things would have been a lot different. But woulda, coulda, shoulda… being on Roadrunner obviously shaped the way that we were going to be marketed, towards a more rock add metal crowd,” he says. “I think when you had this band from LA playing something that wasn’t industrial, it wasn’t death metal, it smudged the lines.”

And thankfully nobody has ever bothered to define them again.

This was published in Metal Hammer issue 131