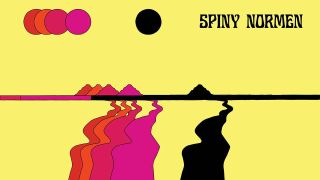 Back in 1976, Texan teenagers Steve Brudniak and Gerry Diaz were like many American kids who didn’t really fit in. They’d skip class, they’d smoke dope, they’d listen to Alice Cooper, and they’d dream of becoming musicians. Gerry played guitar, Steve had a piano at home, and they’d jam.

Eventually, Steve got his own keyboard, a creaking Vox Jaguar that once belonged to Fever Tree, the psychedelic Houston outfit who had a hit with San Francisco Girls (Return of the Native) in 1968, and the duo began to mess around in ernest. They added a bass player (Steve Koch) and a drummer (Norman Davis), and proceeded to spend as much time annoying the neighbours as they could.

When the band scored some time at a local recording studio, Davis didn’t show up for the session, prompting the remaining members to name themselves Spiny Normen (note the ‘e’) in tribute to their stay-at-home sticksman and to Monty Python (Spiny Norman was a gigantic imaginary hedgehog character in Python’s famous Piranha Brothers sketch).

“Over the next three years we began to experiment,” says Brudniak. “Waaaay off into the beaten path, spending months penning intense, bizarre, surreal and mind affecting pieces influenced by King Crimson, Pink Floyd, film soundtracks, Van Der Graaf Generator, and the like along with some bad bad acid trips on my part. What came out was still, to this day, in my humble opinion, some very complex, untouched territory, holy-what-the-? stuff. We were all about 19.”

The band’s one album, recorded at Alvin Community College studio on an 8-track desk, is finally seeing the light of day. Released by Riding Easy on February 23, it’s a delightfully demented piece of work, mixing hard rock, progressive rock and twisted psychedelia into a darkly entertaining whole.

Take The Bell Park Loon, for instance. Built on a classic crunching guitar riff, it’s augmented by a flute part that’s ripped straight from the Ian Anderson playbook, and climaxes as the two instruments engage in frantic battle.

“The song Bell Park Loon is about a chap who seemed to be in residence at the park,” says Diaz. Back in the late 70’s Houston’s inner city was quite the place to explore without too much hassle from folks. On one such late night excursion, Brudniak and I discovered Bell Park off Montrose Boulevard, near the art museums.

“We soon realised there was another visitor sitting by the pond, mumbling to himself and yet a bit upset at us for disturbing his personal tranquility. Steve wound up writing the poem and I remember coming up with the guitar riff almost instantly after deciding it should be a song.”

“I was obviously a Jethro Tull fan,” adds Brudniak, “and had a few flute chops and inserted some King Crimson-esque, schizo man vocal styling, appropriately honouring our schizophrenic subject.”

So what’s it like to see your debut album released decades after the original recordings were made?

“It didn’t last long and we were way behind and way ahead of our time,” says Brudniak. “I’m so ffffn thrilled though at 54 to see what this world of open-ended listeners will think of Spiny Normen now. The 19 year old Steve is getting his dream fulfilled. Gerry and I still experiment here and again with guitar and theremin in an effort called Psylobison. Just as touched, but its not going to give you such bad dreams.”

Spiny Normen is released by Riding Easy on February 23.