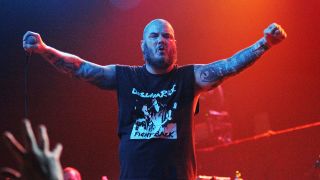 Born on a lark and forged in misery and tragedy, Down has slowly eclipsed all the bands it rose from to become one of the most vital and authentic heavy rock bands in the world, a skull-cracking juggernaut of Sabbath-inspired slabbage that arouses bone-deep loyalty in their fans and illuminates the lasting power of friendship and unity in the face of overwhelming adversity. A true band of brothers, Down is the face of the new classic rock – bloodied, battered, but resolutely unbowed.

It is hard to remember a time when New Orleans was not synonymous with grisly, sludge-punching metal. Pioneered by the bruising Crowbar and agitated by the frequently terrifying Eyehategod, the scene percolated in the late 80s, and has spawned a dizzying array of offshoots ever since. From this cauldron of swampy goo rose a handful of high priests: Pantera frontman Phil Anselmo, Crowbar/Kingdom Of Sorrow guitarist Kirk Windstein, Eyehategod guitarist Jimmy Bower, Corrosion Of Conformity frontman Pepper Keenan.

By the early 1990s, this tight-knit group of friends found themselves in an odd position – they were all famous. Pantera was one of the biggest metal bands in the world. COC jumped from hardcore thrash to 70s-inspired Southern hard rock and managed to nab a major label deal and two top-20 singles Stateside. Crowbar’s videos were on MTV. Given the uncompromising nature of the bands and musicians involved, this was like lightning striking thrice. While the bands took their successes in their stride, none of them took the bullshit inherent in the major label record industry very seriously, and whenever they could, the drug-sludge pioneers got together in barns and living rooms to jam and stay grounded.

Eventually, songs were written and recorded, and Down was born. A demo tape was dubbed on a jambox and stealthily passed around in the metal underground. Down’s true identity was deliberately kept secret.

“We just passed out tapes, just went, ‘Hey, check this out’, and it started getting around,” says Crowbar/Down guitarist Kirk Windstein. “People in other bands started getting into it. James Hetfield was one of the first ones to get on board. Pepper had made about a dozen shirts with a tiny Down logo – this was back in the mid-90s – and Hetfield was on the cover of a magazine wearing one of those shirts. We hadn’t even had a record out yet.”

Demo tapes and word-of-mouth spread like wildfire, and Down quickly became metal’s newest supergroup. The band’s first album, 1995’s NOLA, went platinum. Previous obligations kept them from maintaining the momentum, however, and their follow-up, II: A Bustle in Your Hedgerow – which would also feature former Pantera bassist Rex Brown – would not arrive for another seven years. It was not nearly as well-received as the first, and once again, the band went into hiatus. This time, however, there was no guarantee that they’d return.

After a spell of heavy touring in the US – including a stint on Ozzfest – the years following Down’s first hiatus in 2002 were pockmarked with almost unimaginable tragedy for all the members, and especially for Phil. Pantera had broken up in a cloud of animosity. In 2004, his former bandmate Dimebag Darrell was savagely murdered onstage. Phil struggled with both drug addiction and crippling back pain. And then, in 2005, Hurricane Katrina hit New Orleans, wiping out large portions of the city and turning Down’s beloved NOLA into a disaster area.

It was under this pitch-black cloud that the band got back together, a group of battle-fatigued friends trying to make sense of all the chaos. While they would eventually write and record their strongest and most well-received album – 2007’s III: Over The Under – their first decision was to tour Europe, unannounced and with virtually no outside support.

“I think we all embraced the challenge of doing it that way because it really was pretty ballsy,” says Kirk. “I mean, who do we think we are? We hadn’t had a product out in four years; we hadn’t even played a show in four years. In the back of our minds, of course, we had hoped it was going to go well, but we really didn’t know.”

For Pepper, the decision to tour Europe was especially bittersweet. Just a year prior, COC had planned a hell-for-leather run through the UK and Europe. They also had a massive new album to back it up. After years of building up an arsenal of arena-ready Southern-metal epics and honing their heads-blowing chops, the ever-embattled COC were poised to finally push through to the big(ger) leagues. And then the storm hit.

“That album, In The Arms Of God, in my opinion, was stunning,” says Pepper. “We had a tour lined up in the UK to support it. We were going to go out with Motörhead. And then Katrina hit.”

The hurricane quite literally washed away COC’s tour plans. Things only got worse for the band from there.

“The next thing we knew,” our record label, Sanctuary, was gone. It vanished. We had no tour, and nobody could get the record. I’m still trying to get that re-released over there.”

And so, under this thick black cloud of misery and disappointment, Pepper and the rest of NOLA’s finest decided to rally.

“It started with us trying to get together after Katrina, and after Darrell was killed… we were asking ourselves, ‘How can we even do this?’ So we decided to just go to Europe and play some shows and see what happens. But it ended up being much bigger than we ever thought it would be. It started out with us practising in a shed, and it ended with us playing at Donington in front of 80,000 people.”

The tour was not only a success, it was a rallying point.

“What was great is that we did it all on our own,” says Pepper. “Having a major record label behind you is good for some things. It can be a great help. But the thing about that tour was, we had complete control over everything.”

By the time it was over, New Orleans’ underground heroes finally had their heads above water.

“We have always been a cult band,” says Kirk. “It just became a very big cult.”

After the smashing success of the European tour, the band returned home and recorded III: Over The Under. It was released in 2007 and, along with a bruising three-year touring schedule, cemented the band’s reputation. It was not, however, an easy haul getting there.

“We recorded it in LA mostly because, after Katrina, most of the studios here in NOLA weren’t even up and running,” says Pepper. “Katrina had a massive effect on us. In a way, it was good just to get out of New Orleans to stop dealing with the day-to-day problems for a while, stuff like no water pressure, things most people take for granted. So we headed out there to finish the record and get our heads together.”

“Down III was really difficult to write and record,” says Kirk. “Los Angeles wasn’t cool with me at all, and the sessions were really drawn out, too. It took us from February to July, we had to switch studios, and we toured Canada in between. It was just not a good situation.”

Still, the end product was clearly worth the toil. Down III debuted at number 26 on the Billboard charts, and thanks to what the band has dubbed the ‘Iron Maiden approach’ to touring – i.e. playing everywhere, all the time – Down has gradually shifted from a side-project to a main concern.

“In the beginning, it was supposed to be an underground thing, mostly because of people’s schedules,” noted Kirk.

“Phil was doing Pantera full-time, Pepper was with COC, I was doing Crowbar. It was more just for fun back then. We’d pick up some beer and go to the jam room; just a bunch of friends playing. As time went on, well, we’re now in a completely different situation. It’s really everyone’s main band now. Of course, we’re all still doing other things, too.”

That’s putting it mildly. Kirk has a new Kingdom Of Sorrow album due out in 2010 as well as a new Crowbar disc. Phil, still contending with back issues, is currently hard at work developing his new record label, Housecore Records. Bassist Rex Brown is recovering from acute pancreatitis. Jimmy Bower has a full slate of Eyehategod shows planned for Europe in 2010, as well as a new album. And somehow they’ll fit in a Down headline performance on the Metal Hammer stage at Classic Rock’s first High Voltage festival in July. To top it off, Pepper expresses a desire to scratch the COC itch once again.

“If I can figure out the logistics, I’d love to get back out there on the COC end. I just have to get in touch with Woody [Weatherman, COC lead guitarist]. He lives in the middle of Virginia, and I have to write him a letter – he’s completely off the grid. I have to mail it to his next-door neighbours and hope they get it to him. COC’s a strange band, man. You almost have to speak to them telepathically to get anything done!”

In the past month, the New Orleans Saints won the Superbowl, and the city voted in a vibrant new mayor, Mitch Landrieu. A wave of narcotic optimism has overtaken the embattled city, and the deep wounds of Hurricane Katrina finally seem to be healing.

“New Orleans is on a better track than it’s ever been,” says Pepper. “And it’s more than just football. This town has been through hell lately, and I feel like we just turned a corner. There’s a lot of young people here. A lot of people who came here as volunteers, fell in love with the place, and ended up staying. It’s pretty wild. It’s like nothing I’ve ever seen before around here. The spirit is just amazing.”

For a band that has endured more than their fair share of tragedy, this new rosy perspective is bound to rub off on ’em when they get together later this year to write and record Down IV. What’s in store? Fiddles? Banjos? Angelic choirs?

“We’re just concentrating on putting out an ass-kicking record,” says Pepper. “New Orleans is back on the upswing, so we’re going to record it here at home. It’ll probably have a lot of those aspects. It should have an easy livin’ vibe.”

To read more about Down and Phil Anselmo’s best vocal performances, then click on the link below.

Down are playing Download festival 2016. Find out more information here.