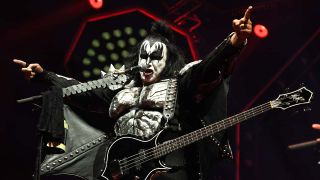 So it’s goodbye Kiss. The road that began in New York City back in hard rock’s Pleistocene Age is finally running out. As Gene Simmons puts it: “There just aren’t any more mountains to climb. We want to go out in style with the people that put us here, the fans.” And there you have it. Over, done, would the last member of the Kiss Army still standing please turn out the lights.

Hang on, wait a minute. Gene said that in back in 2000? And Kiss didn’t go out in style, or in any other fashion? Well, sweet shit, who’da thunk it?

Eighteen years after that first fake ending, Kiss are currently on the One Last Kiss End Of The Road tour, a title that would be definitive were it not for the fact that little 2000 jaunt was dubbed The Kiss Farewell Tour, which was really definitive. But this is definitely the end. That’s it. Kiss are retiring. So long, suckers. Until next time.

Let’s park the cynicism for a second and assume that Gene, Paul, Thingy and Shemp really are calling it a day. Just because Kiss are winding things up doesn’t mean Kiss are done. More than any other outfit in the history of modern music, endurance is hard-wired into their very being. Whether by design or accident, there are enough in-built protocols to ensure that Kiss lasts long after the men who conceived it have teetered off to the great firehouse in the sky.

It’s a heartless bastard who says that people are only interested in Kiss because of the costumes, the make-up, the pyros, the lights. Heartless but true. Sure, Kiss have written a bunch of tremendous songs (and Uh! All Night). But so has every other rock’n’roll band on the planet. It’s not the music that made Kiss. They could go onstage and spend 90 minutes scratching their balls in front of 10,000 tons of exploding fireworks and projectile blood-spitting and it would sell out every single night. Take away the pyros and the costumes and you’re left with a fair-to-middling rock’n’roll band that no one’s much interested in. Harsh? One word: Animalize.

There’s a precedent for this. In fact, there are hundreds of precedents. Beethoven died nearly 300 years ago and you can still hear his music being played by orchestras the world over. Same goes for every other classical composer, ever. Nobody cares who’s in the violin section or tooting the oboe. Gene Simmons isn’t a violin player, and he’s certainly not Beethoven. It’s the experience that counts. And if that experience comes dressed in Bacofoil shoulder pads and plastered with panstick, what’s the problem?

Let’s call it The Trigger’s Broom Theory Of Rock’N’Roll Immortality, after a character in the iconic British sitcom Only Fools And Horses. You have a broom made of a head and a handle. You replace the head, is it still the same broom? Yes, it is. A few years later you replace the handle. Is it still the same broom? Yup. Swap the head, then swap the handle again. Same broom. The parts might be different, but the broom – its essential broomishness - remains. Now put make-up on the head and the handle, and what have you got? Exactly.

Gene wears his avarice like a badge of honour, but money isn’t the motive here. Not the main one, anyway. What everyone overlooks about Gene Simmons and Paul Stanley is that they were born with a ‘Fuck you’ streak a mile wide. “Kiss are never gonna amount to a hill of beans.” Fuck you. “Kiss are the worst band in the world.” Fuck you. “Gene Simmons is a soulless, money-grubbing whore.” True, but fuck you anyway. Kiss’s ongoing success has been one long fuck you. Their continued success after its main participants have retired or died will be the biggest fuck you of all. (Of course, the money’s still a big factor. Just because they’re dead doesn’t mean they’re going to turn it down).

It’s all a moot point anyway. Gene mapped out Kiss’s future years ago, canny old dog that he is. He knows more than anyone that bands aren’t immortal, but brands can me. He’s talked about franchising out the Kiss IP: here’s the Japanese Kiss, here’s the Brazilian Kiss, here’s the holographic Kiss, here’s the robot Kiss. It sounds ridiculous, but so did the idea of four kids in high heels and spaceman make-up taking on the world back in 1973.

Kiss is Gene Simmons and Paul Stanley’s shot at immortality, and by god, they’re not going to let it get away from them When every other rock musician is dust in the wind and Gene and Paul are just brains in jars in some futuristic cryogenic chamber, this magnificent entity they’ve created will live on. So let’s keep an eye out for the 2047 Definitely, Honestly, Probably The Last Ever Farewell Kiss Tour Ever (Possibly). We’ll be there, even if Gene Simmons and Paul Stanley won’t.