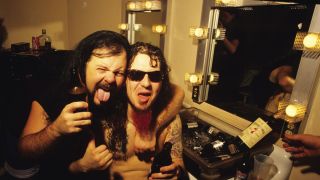 “There is so much magic with brothers in music; they just feed off each other,” says Vinnie Paul, looking back on the 20-plus years he shared in bands with his brother. “I could take off on a drum thing and Dime could follow me on guitar and vice versa. In my head I’d know where he was going,” he continues. “Whether it be AC/DC or Van Halen or whoever, brothers have that magic bond. Telepathic is a good word for it. It’s naturally there, and it’s unspoken.”

When you listen to the locked-in riffs and pummelling kicks that you can find right the way through the Pantera back catalogue, all of a sudden telepathy becomes a whole lot more believable. Album after album, track after track, where Dime’s lead goes, Vinnie’s drums are right there, locked in tight as you like. Walk may be an obvious choice, but it is the epitome of how solidly guitar and drums can meld, and the same can be said for Becoming, Primal Concrete Sledge… the list goes on and on.

It’s such an incredible combination that it’s easy to think that some kind of mystical force drew the Abbotts to their respective instruments. As Vinnie reflects, however, it turns out that it was more a case of a big brother pulling rank.

“It was the Van Halen story. We both started on the drums, I got better than him and wouldn’t let him play anymore,” he laughs. “Dime got mad and went to my dad and my dad gave him a guitar. Thank God it happened that way.”

That decision turned out to be quite the masterstroke, and Vinnie made up for demoting his little brother to guitar by making room for him in his band a few years later.

“Dime wasn’t part of the first version of Pantera, but once we started I kept telling them that we needed to bring my brother in,” Vinnie explains. “Finally, one day they let him come down and were like, ‘You want this little punk in the band with us?’ I told them he was the guy. Once we got him in the band he became more and more of the guitar player he eventually became. From that point I never played with another guitar player until Hellyeah.”

Right from Pantera’s formation in 1981 up to Dimebag’s tragic death, he and Vinnie shared stages, studios, rehearsal rooms, cramped tour buses – the works. It shows just how far their bond went that when we ask Vinnie about the dust-ups and blowouts that two brothers so close must have experienced in that time, he hits us back with a flat-out rebuttal, before adding: “It was always great, we worked as a team on everything. I was the right arm and he was the left arm. We understood each other and we fed off each other.”

It was 18 months – an eternity for workaholics like the Abbotts – after Dimebag’s passing that Vinnie got back behind the kit for real, and he has no hesitation in admitting that making music again without his brother required a massive adjustment.

“Music has always been huge to me,” he tells us. “After what happened to my brother, though, I didn’t know if I would play music ever again. I took a lot of time to collect my thoughts. After losing him it was very, very difficult to learn to do things on my own without him. It was difficult to step into music and create music without him.

“He’s still there to me, he’s with me everywhere I go, but it was the biggest challenge I’ve ever had in my life.”

As he looks to the 10th anniversary of the horrific night that he lost his brother, Vinnie swaps excitable recollections for hushed tones, with a deep pain audibly present in his voice all these years on. It’s quickly apparent that December 8 is not a date that he will be looking out for on the calendar, but he is still thankful for the diehard fans that will mark that day; they’re the ones who will ensure that Dime will always be known as one of the greatest heroes the metal world has ever seen.

“I’ve learnt to be able to deal with it,” he admits of the sad anniversary. “For the first couple of years it was crushing and it was really hard for me to carry on. I’ve learnt to appreciate all the things that he has left us, all the music and all the great times, so I embrace it. I’m not looking at it as an anniversary – an anniversary marks something special that has happened.

“To me, it’s just another December and I’ll do my best to keep my head up as I always do and just remember him. It’s amazing to me how his legacy continues to grow and how the fans make him larger than life.”