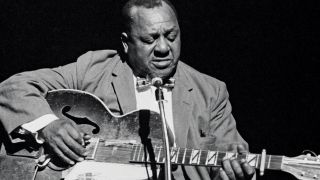 Baby Please Don’t Go is a foundation stone of the blues repertoire, one of the most revived, adapted and generally covered songs in blues history. Its own history as such seems to begin in the 1930s with that inveterate blues rambler Big Joe Williams. By the 50s it is on the way to becoming a standard, renewed constantly by leading blues artists of the day. Closer to our own time, it has been reinterpreted by artists as diverse as John Mooney, Jessie Mae Hemphill and Aerosmith. But its most potent transformation was made just over 50 years ago by a young Van Morrison, reclothing this old check-shirt-and-overalls blues in the snazzy modern clobber of British R&B.

Where Baby Please Don’t Go comes from, way back, nobody knows. Some folklorists discern its origins in an old black folk song from slavery days, Long John, and link it to other songs about imprisonment and escape that share its themes and melody, such as I’m Alabama Bound, Another Man Done Gone and Don’t Leave Me Here. It isn’t a fixed text: the verses float in and out, sometimes from (or to) other songs, the only constant the refrain, ‘Baby, please don’t go/Back to New Orleans/You know I love you so.’ (Though this isn’t in Big Joe Williams’s original lyric, which has a somewhat puzzling reference to cold ice cream.)

Blues is full of these impermanent texts, shape-shifting with each new singer who adopts them. But from time to time someone makes a record of one of them that fixes it in the public imagination and memory, and thus a particular sequence of verses becomes the, so to speak, authorised version.

Big Joe Williams was constantly on the road, back and forth between Mississippi, St Louis and Chicago, or outward bound for New York or LA. But he kept his links with the south, and in later years returned to his birthplace in Crawford, Mississippi. He had left there as a teenager, making music on travelling shows and in jug bands. In the 30s and 40s, based in St Louis, he made numerous recordings, many with the first Sonny Boy Williamson, and introduced his own invention, the nine-string guitar. In the late 50s he began a new career as an album artist and coffeehouse performer, and for the next 25 years he enchanted a whole new audience with his old-time blues singing and guitar-playing.

Williams first recorded Baby Please Don’t Go in 1935 with a band credited as his Washboard Blues Singers, shouting the lyric amid the knockabout street music of fiddle, guitar and washboard. Six years later he did it again, for the same label, Bluebird, but now titled simply Please Don’t Go. This was a stripped-down performance – just Big Joe on guitar, session bassist Alfred Elkins playing what may have been an early washtub bass, and Joe’s friend John Lee “Sonny Boy” Williamson. But the combination of Joe’s gruff voice, the crying responses of Sonny Boy’s harmonica and the strong bass pulse gave it a dynamism that many subsequent users of the song would try to replicate. The record seems to have sold quite well, and there can be little doubt that this is the version that imprinted itself on the blues consciousness.

Big Joe recorded it once again with Sonny Boy in 1947. For a time he had what you might call squatter’s rights to the song, but by the late 40s it was escaping from his hands, as younger blues artists were drawn to it. From then into the early 50s it was recorded by, among others, Lightnin’ Hopkins, John Lee Hooker, Big Bill Broonzy and Muddy Waters.

Another John Lee, an obscure singer from rural Alabama who made a handful of sides around 1956, gave the song a magical makeover by singing it over a fast-moving accompaniment on guitar and panpipes. It was as if he was channelling the restless spirit of a bard of the past, Henry Thomas, “Ragtime Texas”, the still- mysterious figure whose Bull-Doze Blues, with its jaunty, whistling-like panpipes, was the template for Canned Heat’s Goin’ Up The Country.

John Lee’s Baby Please Don’t Go made little impact on its original audience, and the disc became a collectors’ item. In Britain in the late 50s and early 60s no one would even have heard of it. But other versions did cross the Atlantic to give Baby Please Don’t Go a page in the blues songbook from which 60s beat groups derived much of their repertoire, alongside Hoochie Coochie Man, Boom Boom, Baby What You Want Me To Do and the rest of that stable of warhorses. Very likely it was Muddy Waters’ hard-driving version on the influential At Newport LP that caught most ears – but not all.

One of those bands was the Belfast quintet called Them. Their singer, Van Morrison, was an 19-year-old blues and R&B fan. Doubtless he had come across Muddy Waters, but what had galvanised his interest in Baby Please Don’t Go was a version by John Lee Hooker, titled Don’t Go Baby, made for King in 1949. Morrison had come across it on the LP Highway Of Blues, issued on King’s budget-line subsidiary label Audio Lab. (The album is now rather collectable. A fine-condition copy was sold on eBay earlier this year for $500.)

Hooker’s King sides were recorded, to put it politely, without fuss, probably in the back of a record store. On Don’t Go Baby you can hear people talking in the background, and on another track someone opens a door and hastily shuts it again. But – although one feels like saying, “And, for that reason…” – they are tremendously atmospheric. Morrison heard Don’t Go Baby and thought it, as he told journalist Charles Shaar Murray years later, “unique, different, with a lot of soul”. He liked Hooker’s untypically fast treatment and decided to do it that way himself – if not more so.

Them recorded Baby Please Don’t Go as their second single in October 1964. It was released in November, the band performed it on Ready Steady Go!, and it eventually reached the Top Ten. Even 50 years on, one can see why. The sheer urgency of the recording, its throbbing heartbeat, the stabbing lead guitar (sometimes attributed to Jimmy Page but now generally agreed to have been played by Them’s Billy Harrison – Page may have played rhythm guitar)… in this guise Baby Please Don’t Go became a song of teenage love and teenage anguish, and one of the defining records of the British R&B movement.

Back in the USA, in blues circles, it was now comfortably established as a standard. In 1969, Fred McDowell included it on his most amped-up LP to date, I Do Not Play No Rock ’N’ Roll. The album’s title was taken from a bit of schtick he often used in performance, and here it prefaces his version of Baby Please Don’t Go: “I do not play no rock’n’roll, y’all. I just play the straight natural blues… Only way you can rock Fred, you gotta put him in a rocking chair.” For all that, Fred and a funky rhythm section give the song a distinctly rocking pulse.

Perhaps the most striking post-Them version of Baby Please Don’t Go has been the one by harmonica-player Paul Butterfield’s Better Days, on their eponymous album of 1973. It was nothing like the Belfast boys’ take: more relaxed, less assertive… indeed, positively laid-back. Which is what might have been expected from the musicians involved, old Woodstock friends from the folk-blues milieu of the 60s such as singer and slide guitarist Geoff Muldaur, Maria Muldaur on fiddle and backing vocals, and Amos Garrett on guitar. It’s an inventive and delightful take on the song from a group that didn’t last long but should be better remembered.

The appeal of Baby Please Don’t Go touched artists beyond the borders of the blues. Back in 1952, the doo-wop group The Orioles had had an R&B Top Ten hit with it, in 1954 singer Rose Mitchell gave it a dramatic Afro-Caribbean treatment, and several Cajun groups have recorded it, among them The Lawtell Playboys and The Carrière Brothers. In Australia, AC/DC, inspired by the Them version, chose the song for their first LP, High Voltage, in 1975; released as a single, it reached the Australian Top Ten.

The New Orleans-based singer and slide guitarist John Mooney cut a strong version of he song on his 1990 album Late Last Night. Approaching it from a very different direction, the Mississippi singer and guitarist Jessie Mae Hemphill recorded it several times, one early take featuring a folk instrument even more venerable than the panpipes, a diddley bow, a kind of homemade single-string guitar. On later recordings of the song her guitar accompaniment had an underscore of percussion from the jingling ankle-bells she wore while performing.

One could carry on fishing versions of Baby Please Don’t Go out of the great lake of blues and the neighbouring lagoon of rock. The song’s status as an unarguable standard of modern popular music has been ratified by both the Rock And Roll Hall Of Fame – which has placed it among the 500 songs that have shaped rock’n’roll – and the Blues Hall Of Fame. Baby Please Don’t Go just… won’t go.

Big Joe Williams set this ball rolling with the condensed energy of his 1941 recording, and lovers of old- school blues may always prefer that version. But the youthful hyperdrive of Van Morrison and his pals propelled Baby Please Don’t Go into a wider musical world, where it retains all its power to thrill. So our hat is tipped to Them.