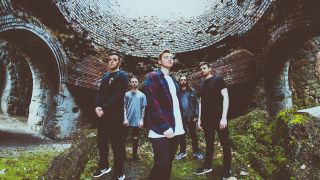 Currents have been pummelling ears with their dynamic blend of djent and raging metalcore since 2011, but the Connecticut quintet have resolutely stepped things up a gear. After two EPs and several line-up changes, when the band hired new vocalist Brian Wille, the final jigsaw piece they were missing fell into place. The band’s debut full-length, The Place I Feel Safest, has just landed and is the sound of a band truly hitting their stride, a punishing mix of intricate guitar parts and bouncy choruses influenced by Architects and Northlane, all drenched in cold atmosphere.

“I hadn’t been in a serious, committed band in maybe a year and a half and I was starting to lose my faith in music,” reveals Brian. “I was like, ‘Do I really want to do this? It’s just making me more sad.’ Nothing was really connecting and I was like, ‘What am I gonna do?’ I had so much I wanted to say but I had never had the platform.”

While guitarist Chris Wiseman handled sonic duties – apparently writing 50 songs that were eventually whittled down to just 13 in the studio – the band gave Brian complete creative control over the lyrics, allowing him free rein to explore his inner turmoil. As a result, despite its title, The Place I Feel Safest goes to some pretty dark places. Single Apnea, for instance, rages with abhorrence at sexual assault.

“A friend of mine had a friend he was seeing and they were in a bar together,” explains Brian. “He started to notice that she was acting strange, literally falling asleep. They went to the emergency room and found she had Rohypnol in her system. There was a bartender who had a reputation for drugging girls and taking them back to his place. Nothing happens to him, all he gets is a reputation for being a creep. No justice is served to the guy even though people know he’s done this to people. When I was writing that song, I was just like, ‘Man, what would I do to a person like that?!’”

Elsewhere though, the demons Brian attacks lyrically are his own, his frenzied, larynx-tearing performance an exercise in catharsis. “A lot of it was just me versus my head,” he admits. “When I was a little kid I’d get made fun of a lot for being a weird kid. I’d get mad and it would egg the kids on to pick on me more because it was funny to them. I’ve always dealt with aggression. It never really got into check and that was the inspiration for a lot of lyrics. It’s been a way to make peace. When we play shows, that’s therapy for me.”

The Place I Feel Safest is out now via Sharptone

Sounds like: Djenty progression wrapped up in infectious, hard-hitting metalcore.

The 90s issue: Your definitive guide to the craziest decade in metal