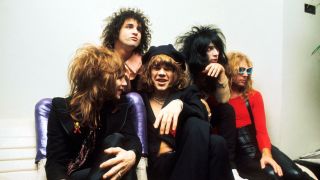 “Picture this,” says David Johansen. “Here we are in this house on a lava flow, overlooking the whole ocean. There are palm trees everywhere, whales are frolicking and the frangipani is in bloom. So we just came in one morning and started playing it. They play a lot of music like that over there; it’s the prevalent beat.”

The New York Dolls singer is casting his mind back to Hawaii, where the band were shacked up in January this year, and their curious remake of an old classic.

Guitarist Sylvain Sylvain, the other surviving Doll from their scuzzed-up 70s springtime, remembers the moment too: “We were sitting on top of this hill, looking down, and I saw this cruise ship that looked like a hotel on water. All of a sudden it just came to me to do a calypso version of Trash. David came up and said: ‘Aw, that’s beautiful, man. Let’s try it.’ I felt like I was in one of those bands that gets a deal to play a cruise ship. It would be like one of those Teddy Pendergrass deals, y’know – women and children only. Can you imagine?”

Not really. Stranger things have happened, but the notion of the New York Dolls as inter-buffet ‘talent’ on a Saga liner is pretty much unthinkable. Yet, to the Dolls of 1973, the year of their eruptive debut album and the year they buckled the musical landscape of New York forever, so would the idea of recording in the Pacific idyll of Hawaii. Come to think of it, more than 35 years on, so might the idea of the Dolls being around at all. But here they are, Johansen and Sylvain, both pushing 60, both now elegantly weathered, still spading out some of the slammingest, dirtiest old rock music on the planet.

’Cause I Sez So is the band’s fourth studio album – and second since their improbable reunion of 2004 – on which they’re joined by honorary new Dolls Steve Conte (guitar), Sami Yaffa (bass) and Brian Delaney (drums). It’s a mighty noise, too, with more than its quota of fat riffs and killer tunes, backing up the suggestion than 2006’s comeback proper, One Day It Will Please Us To Remember Even This, was a rebirth of real substance. In Sylvain’s eyes, “the music is an evolution. The New York Dolls were always a surprise back then. And I hope we still are. I hope we don’t get caught up in doing the same old shit. I don’t forget that the name we hang at the top of the door is the New York Dolls. When we went to find the new guys a few years ago, we never set out to replace anybody. It’s the same thing with the songs. I’d like to put it in poetry, but if it works and it feels good, you just fucking rock it.”

Perhaps the biggest surprise on ’Cause I Sez So, to Dolls fans at least, is the band’s working again with producer Todd Rundgren. This, after all, is the man who oversaw that howling debut; the man who likened those sessions to “a travelling circus”; the man of whom Dolls guitarist Johnny Thunders said: “He fucked up the mix really bad.” Johansen too, has over the years voiced misgivings about the debut’s original mix. So was this reunion a case of burying a very old hatchet? Not quite, it seems.

“We got a call from our manager,” explains Johansen, “who said: ‘Look, if you guys wanna work this season you gotta have a new record.’ Soon after, he called again and said that Todd was available. I asked where, and he went: ‘Hawaii.’ So we said yeah, just like that.”

Rundgren: “My management and theirs may have been talking about some other thing, then the idea of us reconvening came up. So I went to see the Dolls play in Ventura, California late last year. That’s where we kind of sealed the deal.”

Whatever the circumstances, it has clearly paid off. Rundgren’s fuss-free approach lets the music roar forth almost unchecked. The Dolls, as was always the way, are primarily a live band. “The studio’s not really my thing,” Sylvain admits. “You can spend a whole fucking day on one little note. I like it quick and I like it fast, just like my sex. Unfortunately my wife doesn’t appreciate that.”

Johansen was equally insistent on getting the job done: “The thing about Todd is he just records the band the way it is. He doesn’t really do a heck of a lot to it, which we kinda knew before going in. In the course of the entire time it took to make the record, Todd and I said no more than 40 or 50 words to each other. I was probably more chatty with him on the first album, but I was more likely talking about clothes. We’re not the kind of band to plan out an album over a year or something. It’s just a bunch of rock’n’roll songs.”

Rundgren sees a more subtle evolution: “In the studio they realised that if the brand was to have any longevity it can’t be constantly imitating pre- punk rock Dolls. It’s gotta reflect something of what they’ve been through. And David’s gotten into this whole other poetic thing with his lyrics. He’s not just pretending he’s still just a kid from Long Island. He’s now a man of the world.”

So how did this experience compare to that legendary self-titled debut recorded in early 1973?

“That was more of an exercise in crowd control,” Rundgren recalls. “And you have to remember that for the original musicians, even David and Syl, this was the first time they’d ever been in a studio. What you hear on the original record is actually all the Dolls knew. It was every lick they knew, played as good as they could play it. It was all a bit rushed.

“I never thought it sounded bad, but it could have sounded better. Nobody really enjoyed dealing with Johnny Thunders’s attitude, but I took in the whole experience. They were huge back then, even though their record hadn’t yet come out. They were filling the Waldorf Astoria Ballroom. There they were, with all their pierced fans and people throwing up. It was thrilling! It was what rock’n’roll was all about.”

Since then the New York Dolls have been through tumultuous times. After prophetic second album Too Much, Too Soon the band split in ’75 amid drugs and in-fighting. Thunders and drummer Jerry Nolan went on to join Richard Hell in The Heartbreakers. Like the Dolls, the Heartbreakers didn’t last long. Both Thunders and Nolan became addicted to heroin. The guitarist set out on various death in 1991, aged 38. Nolan died of a stroke just months later. Johansen and Sylvain carved out their own careers with varying success. Bassist Arthur ‘Killer’ Kane, blighted with drink problems, gave up music altogether and became a Mormon.

It wasn’t until Morrissey asked the remaining Dolls to re-form for Meltdown 2004 that the band hooked up again. The show was a spectacular success, leading to a live album and DVD. But future plans took a tragic blow with the sudden death of Kane just 22 days after the reunion gig. “With Arthur, I tell everybody they have to see that documentary New York Doll,” says Sylvain. “It’s just the most beautiful fucking thing, and I’m so proud of him. I had gotten in touch with Morrissey post-Arthur’s death. I was devastated. And of course we always had this stigmatism hanging over the Dolls, that we were doomed or something like that. I was talking to Morrissey and he said: ‘The world needs to know about the New York Dolls,’ and that we needed to just try and cut it.”

It’s a legacy of which Johansen, and particularly Sylvain, are now fierce guardians. Of the New York Dolls’ reason for being, the latter is still highly passionate: “We were the first band out of the fucking gate in New York City, before there was anybody else. Getting signed was a huge wall to break down, because before the New York Dolls you had to be fucking Foghat or Led Zeppelin. Whole shows were built around stadium rock; the song itself had lost it pizazz, lost its sex appeal. It had lost the conversation it had with my generation. They were writing operas now for rock. And it was boring as shit.