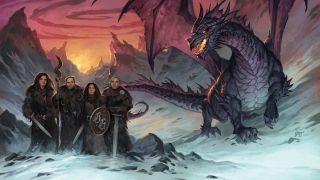 Once upon a time, before the miracles of next-day-delivery online shopping and instant album streaming, there was a perilous dark age. Scattered denizens of Albion who yearned to hearken to the epic strains of Blind Guardian were forced to embark upon a gruelling quest to the overpriced import section of Tower Records in London’s Piccadilly Circus, heavily laden with gold coins.

For those who dimly recall this prehistoric 90s wasteland, the German power metal pioneers’ recent ascent to stardom on these shores is a pleasant surprise. Co-founding frontman Hansi Kürsch happily agrees that 27 years after their Battalions Of Fear debut – and in the aftermath of their biggest UK show at London’s Forum this month – Britain is finally waking up to the jubilant heroism of Blind Guardian, powerfully reasserted on their 10th LP, Beyond The Red Mirror. And Hansi reckons he knows exactly what took us so long./o:p

“It’s not to be blamed on people in the UK!” the singer is quick to insist. “It’s more because of the policy of our old record company. They simply refused to distribute the albums and argued there was no market for it. They were not willing to release any of our albums, therefore it has been very difficult for people in England to get them. There were other bands available, so obviously people preferred to take what they could get!”/o:p

So why were the label so convinced that a band as gifted as Blind Guardian held zero interest for British headbangers? The cool American rock trends – grunge and nu metal – held sway here in the 90s, and even though metal has always been a proudly underdog musical form, where mainstream fashion is regarded with suspicion, it was for a long time the height of geeky uncool to admit to a love of fantasy-obsessed, virtuoso progressive power metal; at least until Dragonforce got a song on Guitar Hero./o:p

“I do remember English magazines making jokes about Blind Guardian and this style of music,” admits the bemused vocalist. “I’ve no real explanation for that, because it was sort of a development of what Iron Maiden and Judas Priest established, and they were always highly respected bands during this period – even in the UK! But for the younger bands, and we were one of them, it seemed to be a closed gate for a while. The only other territory which created problems was the United States. It was the same thing there – the record company didn’t like to release anything that wasn’t ‘in vogue’. But there were always the core metal fans and a strong underground in the UK and the US.”

/o:pBlind Guardian’s growth has been so steady and assured, and the lineup so remarkably stable (just one change of drummer since 1987), it’s tempting to wonder if the foursome ever hatched a plan of attack; a schedule of ambitions that they wanted to achieve by a certain point. Or if there was a gradual realisation that the sky’s the limit.

“When we did Battalions Of Fear, we were completely convinced that this would become a major success worldwide. So we were proved wrong back then!” Hansi chuckles. “We slowly started to build things up, and record companies, journalists and fans confirmed that the music we were doing was valuable to them. Then with Somewhere Far Beyond in 1992 we headlined the Wacken festival, we became number one in Japan and Greece, and there was significant success for us in Germany. That was the album where we thought, ‘We’ve made it.’ We were growing quickly. All the record companies told us metal was decreasing, but we never experienced anything like that.”

That constant growth continued apace throughout the 90s and over the four albums Blind Guardian have released since 2000, with Beyond The Red Mirror the strongest – and heaviest – of the lot. A sequel to 1995’s high-watermark concept album Imaginations From The Other Side (which began the tale of an unhappy, isolated boy receiving messages from other worlds), the band continue scaling up their ambitions with panache, collaborating with two 90-piece orchestras and three classical choirs.

They’re also currently hard at work on an entirely orchestral Blind Guardian album, which Hansi hopes will be out in 2017 and will “define this period of the band’s career”. Asked what drives him onward and upward after all these years, Hansi’s response is simple.

“It was nothing we really thought about, but we’re smart enough to recognise if there’s a chance to be a little more ambitious! The chances of failing were given at points, but we just went for it. The music is the key; it’s the main message. One of the things that makes that easier for us is combining our different elements into the music and seeing how they fit. Maybe that’s also a skill we have; we bring in new elements and in the end they become part of the Blind Guardian universe.”

Having thus augmented the band’s metal core with a multitude of progressive, classical and choral influences over the years, one wonders where the boundaries lie. Is there any genre that Hansi loves that will never feature in the music he makes? “I’ve been proved wrong so many times,” he laughs. “I like some jazz music, but I don’t really see a big chance for us to involve that in the Blind Guardian style. One thing I would like to involve is a stronger punk feeling. Even if it stays complicated, I would like to get a little more of that energy.”

As a glimpse at any Blind Guardian message board will reveal, the band’s global fanbase is renowned for rare levels of obsessional devotion. What qualities can Hansi identify in his music that inspire such extreme reactions?

“That’s a curse and a blessing, I sometimes feel,” reflects the frontman. “I see the privilege that we can attempt a lot of things that other bands would not dare do because the majority of our fans expect us to do something like that, so it gives us a certain freedom. On the other hand, when fans are disappointed they can be very tough. They feel the pain and they are so angry, their criticism is so personal, you really feel like you’ve hurt them! In general, though, we have very loyal fans that follow the route we are taking.”

Perhaps Blind Guardian’s continued growth is precisely due to their bucking of trends; they obey their own muse without tcompromising their message or methods.

“I believe there is still a need and urge for people to listen to demanding music,” Hansi reckons. “Even though we’re in a traditional musical style, there is need for development. My feeling is that people are realising that; they’re tired of listening to the same riffs and harmony structures over and over again. They’re open-minded for something new – it’s just that many other bands don’t dare to do this.”

Such an all-pervading passion doesn’t just impact upon the band’s lives, but also upon every member of the band’s entourage, families and social circles.

“If you look at the band and people working for us, even technicians or engineers, they stay for 10 or 20 years,” Hansi points out. “They become part of this big thing, and their social environment is infected by passion. The passion of the Blind Guardian family.”

That family – especially the British branch – continues to grow on a daily basis, freed from the restrictions of fashion and noncommittal distribution. At last we can proudly gaze with wonder upon the full scope of a majestic career.

BEYOND THE RED MIRROR IS OUT NOW VIA NUCLEAR BLAST

1998: Meticulous epic Nightfall In Middle-Earth is the first BG album released in the USA, and the first to crack the German Top 10.

2005: BG sign to Nuclear Blast. Drummer Thomen Stauch becomes the first (and to date only) member to leave the band.

2006: A Twist In The Myth enters the UK independent Top 40 and 10 other album charts worldwide. The single Fly reaches number one in Japan.

2015: Dazzling return to form Beyond The Red Mirror cracks the German Top Five and five other European Top 40s. In April, BG play their biggest UK show yet at London’s Forum./o:p