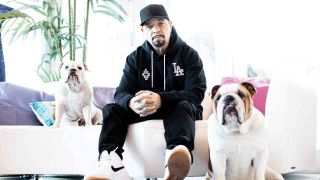 Walk into Ice-T’s house and you are immediately greeted by a breathtaking oil painting of his wife Coco, lying naked with her back arched, tendrils of red fabric strategically placed. Across the narrow entranceway, there’s a portrait of the couple’s late bulldog Spartacus, the animal that co-starred on their reality show, Ice Loves Coco, which ran for three seasons from June 2011 to January 2013.

A narrow staircase leads up to the first floor where Coco invites us in and offers us drinks. Dressed in a skin-tight beige top, camouflage pants and sporting pink-red hair, she’s as much a celebrity as her husband. Standing next to Coco is the couple’s adorable four-year-old daughter, Chanel. A minute later, Ice strides into the living room wearing a black baseball cap, a hoodie, sweatpants and untied white Nike high-top sneakers. After a few minutes of small talk with Coco, about the neighbourhood and the modern architecture of their house, Ice tactfully injects himself into the conversation. “This place works for me,” he says. “It’s kind of like a Miami home in the middle of New Jersey. “Everyone in Jersey has got Colonial houses and that reminds me of slavery. No way was I gonna live in a Colonial.”

This ain’t Beverly Hills or Greenwich Village, New York. This is suburban Edgewater, New Jersey, and for the past five years it has been the home turf of Ice-Mothafuckin’-T. Ice was attracted to Edgewater by the panoramic cityscapes, the variety of restaurants and, perhaps most of all, the 15-minute commute to Chelsea Piers, where Law & Order: SVU, is shot. For the past 20 years, Ice-T has played Detective Odafin ‘Fin’ Tutuola on the hit series.

At 62, Ice still looks street-lethal – tall and muscular with a thin, dark moustache and a short, anchor-shaped beard unflecked by grey hairs. In conversation he’s friendly and verbose, but even when he’s smiling, his eyes reflect an underlying intensity. As he sits on a white leather couch decorated with pink and purple pillows, his two English bulldogs Maximus (eight-year-old son of Spartacus) and Alexus (the newest addition to the family) sit faithfully by his side. He’s most excited to talk about the new Body Count album, Carnivore, which includes songs about inherent savagery, police brutality and income inequality. The colourful pillows and children’s toys scattered across the room contrast with Ice’s OG image.

“When people used to come over to my house, they would expect to see motherfuckers hanging off meat hooks ’cause they been listening to my music,” Ice says. “I’m like, ‘What you think I was robbing and stealing for back in the day?’ The most brutal criminals I’ve ever met are in search of peace. They want that house with a fence around it, man.”

Body Count’s frontman has come a long way since he was a teenager on the streets of Los Angeles. But Ice T isn’t entirely a product of his environment. Born Tracy Lauren Marrow in Newark, New Jersey, Ice grew up in the nearby suburb Summit in a duplex house on a quiet street. When he was in the third grade (the third year of primary school), his mother died of a heart attack. He was raised by his father, who worked as a conveyor belt mechanic.

Then, tragedy struck again. When Ice was 12, his dad died of coronary failure so Ice moved in with his father’s sister, who lived in a safe part of Los Angeles. Although Ice befriended some of the Rollin 60’s Neighborhood Crips street gang in high school, he didn’t become a gangster until he graduated and moved into his own place.

“I was 17 and I was living on Kansas Avenue for $100 a month and it was the scariest place I’d been,” he says. “I was getting $250 a month from Social Security because my parents had passed. So I would pay my rent, budget $100 a month for food and keep $50 in my pocket. That’s when I got into crime because when you’re broke, jacking one car stereo would double your income. You realise that and then you start to do other things.”

Ice T specialised in robbing jewellery stores before he decided he wanted to be a rapper and didn’t want to risk his career by getting arrested. And he has come a long way since his 1983 debut rap single, The Coldest Rap/Cold Wind Madness. He released his first album, Rhyme Pays, in 1987 (one of eight rap records) and launched Body Count in 1990 with the controversial single Cop Killer.

Ice lived in 11 houses or apartments before putting out his comeback metal record, 2014’s Manslaughter. The next year, he and Coco moved to their luxury home in Edgewater. The cosy upscale community is adjacent to the Hudson River and is a mere nine miles from New York City, so real estate here is a commodity. That’s why the couple bought the frame of a house and hired a construction team to build it up instead of outward. To travel from one floor to the next, they ride a glass elevator.

“I thought it was overkill ’til I actually started living vertically,” he says. “And then when you walk up to the fourth floor and you go, ‘Oh shit, I left my sunglasses downstairs,’ that’s when you realise you need a fucking elevator.”

Downstairs in the kitchen, Coco explains how they chose white cabinetry because it complements any other colour in the house. As she talks, Chanel uses her rhinestone-decorated iPad to take pictures of her parents and their visitors. Before their daughter was born, Ice and Coco often ate out. Now, they’re usually too tired, so Coco has started cooking Ice’s favourite foods, including tacos, lasagne and spaghetti.

“She’s a decent cook,” Ice says. “I had to teach her to stick to the recipe, though, ’cause it’ll say to use one spoon of sugar. She’ll be like, ‘Well, if one is good, a couple more will be even better.’ I have to keep that shit in check.”

When he’s not hanging out with Coco and Chanel or playing videogames on his giant screen TV (“I like shooters because I can murder people without going to jail”), Ice sometimes works on voiceover parts using GarageBand on an upstairs computer. But he saves the bulk of his vocal work for band sessions since he opted not to have a home studio. Years ago, Ice relished his home studio, but these days he thinks of studio time the same way he views hitting the gym.

“There’s something about getting ready and going to the gym that makes you work out more when you’re there than you would if it was in your house,” Ice says. “At home, I get onto the bench and I fall asleep. I’m not really working out. Same with the studio. There’s a ritual. I go and I commit.”

The stairwells and hallways are decorated with a mélange of abstract art, music memorabilia (gold and platinum records, concert photos), images of the family (including the dogs) and tributes from fans. One of the highlights of the house is the lavish master bedroom, which features red wall-to-wall carpeting, another big-screen TV, a robotic-looking reclining chair and a king-sized bed with matching decorative pillows. Ice and Coco jokingly call the bed ‘The Disney Wild Safari Ride’ since they co-sleep with Chanel and are often joined by the dogs.

“It’s cute and funny because we’re all romping around the bed,” Ice says. “But at the same time, it’s frustrating because we have to make special arrangements to have any kind of sex.”

It isn’t just the family chaos that challenges the couple’s sex life. Ice works late and often travels. One thing that doesn’t get in the way is his age. “I just turned 62 and I’m still knocking it out the park,” he says with a smile. “I can still make a baby through a brick wall. Once you stop having sex, I don’t know what the reason is to be alive. To me, it’s the energy that drives life and inspires everything else.”

The bedroom closet was originally designed to hold both Ice and Coco’s clothes. Now, it’s just Ice’s and contains old stage wear, formal outfits, and tons of sneakers. However, it pales in comparison to the two guest bedrooms the couple combined into Coco’s wardrobe, a whole wall of which is filled with colourful stilettos. “It’s cool, ’cause now when we have guests, there’s no room for them so they have to stay in a hotel,” says Ice, adding that Coco’s clothing nook was part of a trade-off for his seven-car collection, which is housed in the garage on a two-level hydraulic lift designed for maximal storage.

Of course, the floor with the master bedroom wouldn’t please the master if it didn’t contain a giant Jacuzzi decorated with lights that change colour at random. “My buddies told me, ‘If you didn’t have a baby, that pool would get somebody pregnant,’” Ice says. “But now, with Chanel here, we fill it up and it’s like a mini swimming pool, so even though it’s too cold to use the outdoor pool, we can still hang out in the family tub.”

To conclude the tour, Ice leads us back to the elevator where we ascend to the roof deck. There’s a bite in the air, but it’s just sunny enough to check out the waterside views of the George Washington Bridge and Midtown Manhattan. As we prepare to exit, Coco gives us tight hugs and Ice, who has been a damn good sport (normally he hates giving house tours) shakes our hands. Someone jokes that since it’s still before dinner, Ice can break out the Courvoisier, invite some friends over, dim the lights and crank the tunes.

“Nahhh,” he says, then smiles. “I grew up around so many people at all times, now I like privacy. When you guys leave, I probably won’t have anybody over here for a couple of weeks. But I don’t do social things. I don’t drink, I don’t smoke weed. So what the fuck are we going to do? Know what I’m saying? I don’t have social engagements. I play video games.”