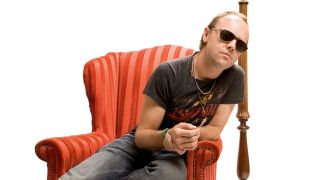 At what age did your interest in art begin?

I have no recollection of excelling at or even doing art at school, but I grew up in a pretty arty household – ‘art’ not necessarily being limited to painting. This was the late sixties, and my parents were pretty into art and poetry, strange kinds of music and Eastern philosophy/Buddhism. My dad had some Warhol prints, and a lot of arty people came to our house.

But that never led to you becoming an artist yourself?

No. I appreciated art over the years but I never actively engaged in it. I have on occasion fiddled a little with painting but it hasn’t amounted to much.

As a kid, which album covers made an impression?

Deep Purple’s Burn, with those candles. I wasn’t a huge Zeppelin fan as a kid, but the Hipgnosis guys made a big impact in that era, and their covers for UFO were very cool. There were some really beautiful images on Thin Lizzy’s Vagabonds Of The Western World and Robin Trower’s Bridge Of Sighs. But for me Rainbow Rising was the most iconic of all.

Metallica albums had generic metal artwork until the nineties, when you used the photography of Andres Serrano for Load and Reload. Was that your idea?

Well, Kirk [Hammett] and I were into a lot of that avant-garde photography, and Serrano was on our radar after all the controversy in America over Piss Christ [a photograph of a plastic crucifix immersed in the artist’s urine]. He used a lot of body fluids of one kind or another. I thought his images were beautiful but they also had an edge to them.

Is it possible for a metal band to be art-rock?

I think so. There’s Voivod, Gojira, Rush. And Trent Reznor – if it’s not metal then it’s pretty fucking close to metal. I would say it’s possible for anybody to be anything.

Metallica’s art-rock statement was Lulu, the album you made with Lou Reed in 2011. Does it matter to you that your fans hated it?

Any artist who put their heart and soul into a project would be lying if they said they didn’t care if people hated it. The negative reaction doesn’t change my opinion about that record. Metallica, obviously, are fairly thick-skinned. But it was pretty hard for Lou to be at the end of that much negative energy.

What made Lou so vulnerable?

He had that front to protect him, but underneath it he was a really sensitive guy. This is fairly basic psychology. He was a guy that put up a front to protect himself from being hurt. But once you got to know him he would let go of that front, that barrier. Lulu was a very emotional project for him. The creation of it was such a beautiful, positive thing. So that negative wave was hard on him.

Do you think art is defined too much by its commercial value?

That goes for almost anything. Art, in the broadest sense, has become an investment thing. If you buy a painting for two million dollars and it’s the right artist, ten years later you can sell it for five million dollars. But for me art has never been about the money. I just believe in great paintings and great artistic expression.

Yet when you sold some of your collection in 2002 the headlines were about the ten million quid you made.

I can’t control that. I had a Basquiat painting that achieved a world-record price at that time. So what? A quarter will get me on the bus.

Do you also buy cheap art?

Yeah! Instead of buying very expensive paintings by dead people, I started buying very reasonably priced paintings by living people. But there’s a fine line between collecting and hoarding. You don’t really own art. You’re the caretaker of it, the custodian, for a period of time. I was in a Danish museum recently, and one of the star pieces was a painting that hung in my living room for eight years. I have a small part in this painting’s history. But to me art is something you pass on. You shouldn’t hoard it. That’s not how art should live.

Have you ever felt out of place in art society?

I didn’t feel out of my depth. In the art world, it was the first time I felt autonomous.

When you start a band as young as I did, so much of your personality and what defines you is that band, that gang. With art I was doing something purely for me and not for the band. That liberated me.

It was that important to you?

Yes. For the first ten years of this band, James and me lived in the same room. And for a long time you still feel that co-dependency. When I got my first place alone, I went to buy a couch. And I was sitting there thinking: “I wonder what James will think of it?” This was a grown man buying a fucking couch! So going into the art world by myself was an exercise in shedding that co-dependency.

Was it a black couch?

Of course it was! Are there any other colours?