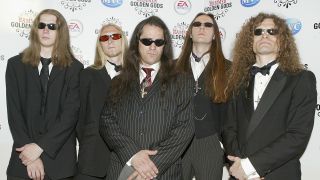 “I think it’s sad that there are generations growing up without his influence. The world is a poorer place for his absence.”

The man talking is David Gray, drummer/lyricist with Satanists Akercocke, so he must be referring to… Dr Who!

Yes, you’ve got it, Gray genuinely feels that the celebrated Time Lord should make a welcome return to the small screen, to enthrall us once again with his travels and travails (and bizarrely enough, the BBC announce that the Tardis-dwelling Doc is indeed being resurrected for a new series, just after we talk to Akercocke). And if you’re somewhat puzzled as to how a practising Satanist with one of the metal underground’s most brutal bands can possibly harbour a misty-eyed, nostalgic love for a fictional character like the good Doctor, then that’s because you don’t know Akercocke.

Often decried as ‘those Satanists in suits’, this London foursome might well fit in with all the clichés that have been thrown in their direction, but the one thing they do have that’s so often overlooked is a sense of humour.

“We take our music very seriously,” insists vocalist/guitarist Jason Mendonca, “but we have fun as well. What’s the point of doing this unless you enjoy it? There are times in the studio when we fall about laughing after we play a song, and we hope that comes across to people who listen. And what attracted us to Neil Kernon [the veteran English producer who mixed formidable new album Choronzon] is that he has a Monty Python-esque sense of humour!”

Mendonca himself has arguably become the focal point of the band, a crucially charismatic charmer.

“Jason’s the one who always gets photographed,” agrees Gray. “I do most of the interviews, but he is the frontman of the band, and our larger-than-life character. And that’s the way it should be.”

We meet in a quiet, comparatively upmarket theatrical bar in the West End of London. The Steve Harris lookalike immediately feels at home, expressing his preference for this environment as opposed to a more rock’n’roll atmosphere.

But Mendonca is a natural at the media game. He has a twinkle in his eye that gets him his own way, and he knows his worth. He can almost seduce people into doing his bidding – although he uses this only on a benign, rather than a sinister, level. Even when the more softly spoken Gray is holding court, nonetheless it is still Mendonca who has your attention – and he has a laugh that’s more of a banshee bellow when it gets to full force!

He and Gray are very much the public face of Akercocke. And they’ve known each other for 16 years.

“To be honest, we were rubbish!” laughs Mendonca. “How bad? Well, when we started writing our own songs we weren’t even good enough to play them. But we loved heavy metal. I even bought a black guitar because it was black – and that was just so metal. It went out of tune just by being looked at.”

Things became serious in ’90, when the pair formed cult band Salem Orchid, contemporaries of Cradle Of Filth among others. However in ‘92, the Orchid fell apart because, says Gray, “of dissension and Satanic hostility directed at each other”.

Four years later, though, Gray and Mendonca got back together, joined by the like-minded Paul Scanlan (guitar) and Peter Theobalds (bass).

“The four of us met up at the end of ‘96,” recalls Gray, “although the birth of the band was at the very start of the next year. We’ve now been together for several years, and feel very stable as a band.”

Unlike fellow Satanists Cradle Of Filth, who are propelled by the single-minded vision and quest of Dani Filth – one that has led to regular line-up changes – there is no control freak within Akercocke.

“Absolutely not,” shrugs Mendonca. “We are very democratic. If someone comes up with any idea, our attitude is always, ‘Let’s try it. What have we got to lose?’. We are very focused and determined, but this is a band of equals.”

“We are very comfortable being part of the metal underground,” enthuses Mendonca. “I just cannot see us ever breaking out of that and becoming accepted to a wider audience. We have nothing at all against Cradle or Dimmu – they’re both good bands, and they’ve obviously got a bigger appeal than ever. In fact, I think it’s cool they’re around, because they might attract people who would otherwise not listen to heavy metal. And, you never know, a few of them might want to get into something more extreme – which is where we come in.”

Inevitably, people are drawn to commenting on the fact that Akercocke have developed a unique image. From the start they’ve appeared in public wearing suits – something seriously at odds with the corpse paint, leather and spikes normally associated with this style of music.

“Of course it’s a deliberate image, aimed at setting us apart from other bands,” says Mendonca. “I would never pretend otherwise. But it’s one that reflects our personality as a band. And, let’s clear one thing up; this is not us taking the piss out of bands who do wear corpse paint. That was never our intention. We respect what they do. Do we get fed up with being called ‘Satanists In Suits’? Not at all. It means we’ve got your attention!”

The suits are merely one aspect to a developing image, that now sees Akercocke being marketed by new label Earache as ‘eccentric English gentlemen’. Are the band at ease with such a representation?

“We are very careful to oversee every aspect of our career,” adds Gray. “So every photo you see of us, and any record company remark about the image has been done with our full approval. I still find it hard to believe that there are bands who allow others to dictate the way they look. That’s not the way we would ever see ourselves.”

Akercocke are very much playing up to the country gents role: grouse shooting in the morning, a spot of polo in the afternoon, a five-course meal in the evening, a then a quick bit of devil worship after the port and cigars. Well, that might seem a trifle glib. But perhaps not that far removed from the ideals of this foursome. And, of course, Satanism does play a major role in the life of the band.

“Yes we are Satanists,” nods Gray with an air of almost practised nonchalance. “But we aren’t trying to preach or convert anyone to our way of thinking. That’s something we leave to the Christian bands. We have our beliefs, and they work for us, But nobody has the right to suppose that just because they have certain attitudes that they should tell everyone else to follow them – that’s arrogance.”

And it seems Satanists also approve of the band.

“We’ve had a few say to us how refreshing they thought we were, because our lyrics aren’t talking in clichés, going on about ‘special relationships’ with the devil! But that’s not what we’re about…”

“What irritates me is when I get journalists trying to argue with me about my beliefs,” interjects Gray. “They have a vague Judeo-Christian knowledge, and really don’t have a clue what they’re on about, but that doesn’t stop them from having a go at me. I suppose we ask for this sort of thing. You can’t write a song called Praise The Name Of Satan and not expect to be asked about Satanism. I wish they were better informed.”

“And is about burning churches!” laughs Gray.

“So,” continues Mendonca, “how can a band claim to be Christian and use a black metal attitude? It’s just crazy. But I guess that proves the nonsense of trying to categorise bands.”

“We have fans on the internet who spend ages arguing over whether Akercocke are a black metal or a death metal band. You know what, we don’t care what you want to call us. It’s all heavy metal, isn’t it? That’s what we are a heavy metal band, and if you ask me if we have a message in our music, then I’d say there is one: LOVE HEAVY METAL! To us that is the bottom line, the reason we do all of this. We love the music.”

For Akercocke, the fun may only just be starting. They might not get the sort of mainstream hysteria currently being afforded The Darkness, but in their own way, this lot might be about to take the underground metal scene further forward. And if they begin a stampede of bands down to their nearest tailor, then you can be sure they’re shrewd enough to make sure they get a percentage from Moss Bros.

For more on Akercocke and the band’s reformation, then click the link below.