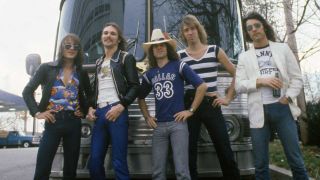 Dave Mustaine is such a diehard fan of the Scorpions that he can reel off as many seminal tracks as you need. “I could talk about the Scorpions all day long,” he says. “I love that band. And they really made it possible for Megadeth to be the band that we are today, to really stretch our wings and reach that musical melodic fortune that was waiting for us.”

The Sails Of Charon

“When I think of the Scorpions, the very first song that always comes to mind is the one that paved the way for me with lead guitar playing, and just the incredible shred factor done with a classical violinist approach on electric guitar by Uli Jon Roth. And that song is the one, the only, Sails Of Charon. For any guitar player that was going to the Guitar Institute Of Technology, it was almost an unwritten rule that you had to learn the solo for Sails Of Charon to be worth your salt.”

“For me, this song was permission to be a metal guy and to have songs with melody. The Zoo doesn’t have a giant riff, but it’s got a really hooky melody. I thought: ‘You know what? This legitimises everything I wanna do. I wanna be one of the baddest motherfuckers in the world on guitar. I wanna play stuff that people can’t play. But I also want to have melody. The Zoo opened the door for us to write heavy songs with melody – and that’s something that separates us [Megadeth] from everybody else in the big four.”

Another Piece Of Meat

“Michael Schenker was always the Kinder Egg of the Scorpions – y’know, would he appear on this record or not? Without a doubt, Another Piece Of Meat is my favourite song he did with the band. There were these really tasty little blurts of guitar that he did in between the vocal lines, and he would almost take this running jump at the solo. It was different from anything I’d heard before in heavy metal.”

“That song came out in the late seventies. Although I was as metal I could possibly be at sixteen, I was still kinda discovering stuff. This song is just full-on plodding metal. And believe it or not, I had jumped on a drum set and learned how to play it on drums.”

“It’s bizarre, when you think about it, how much sexuality there was in the Scorpions’ lyrics. There’s quite a few sexual songs that these guys have. Y’know, you have this, and Virgin Killers, where the glass is shattered, covering the nude parts that would be deemed inappropriate. And then you have the Lovedrive album cover. So the Scorpions were very provocative and ahead of their time. But I couldn’t care less about their artwork – I just loved the guitar playing on this. Y’know, these inexcusable outbursts of shredding guitar.”

“You’ve got that cool galloping riff, and behind it a second guitar doing counterpoint, which shows you how beautiful a guitar duo can be… if they know how to work off each other. Because if you go out there and you just start cramming shit into a song because you think you can, it’s gonna sound awful. No matter how great the song is, if you get a guy in the studio that doesn’t know fuck-all about mixing records, it turns to shit. I never heard any Scorps records that didn’t sound good…”