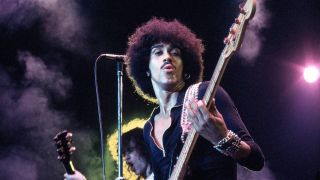 Eerily, days before Classic Rock asked me to write about Cowboy Song, the long awaited officially sanctioned autobiography of Philip Lynott, I’d begun re-reading Mark Putterford’s 1994 biog, The Rocker – until now the best book on Thin Lizzy on the market (shame, then, that author Graeme Thomson misspells Putterford’s name whenever referenced in the credits).

The above criticism aside, Cowboy Song is extensively researched and written beautifully. Despite the approval of the bassist’s estate, no punches are pulled. Scott Gorham talks candidly of the band’s decline – “After all this hard work we’d put in, and now we don’t want to get onstage unless we’re fucked up? I told Phil in a meeting at his house: ‘This is wrong, we’re dragging the name into the gutter, and I think we need to walk away.’” – sentiments echoed by occasional member Midge Ure of Ultravox fame: “It [1983’s Thunder And Lightning album] was horrible. Hideous. [Guitarist] John Sykes sucked everything dry and took all of the emotion out of it. The songs were repetitive and interchangeable.” Elsewhere, associates that allegedly dragged down the book’s subject, including the late Jimmy Bain (described by Thomson as “perhaps the most invasive”), are named and shamed.

The book addresses unvarnished accusations of pride, vanity and insecurity. When Lynott slates co-manager Chris Morrison for breaking up his marriage by working his client too hard, Morrison fires back: “I pointed out to Philip that he moved [wife] Caroline to Ireland so that he could get laid by every woman he met in London. I don’t think that helped.”

An afterword penned by said Lynott’s ex-wife, Caroline Taraskevics (nee Crowther), is particularly moving: “Drugs have a way of spoiling everything, even while they’re telling you they’re going to make it all better.”

In August 1957, on his first day at the Christian Brothers School in Crumlin, the confused eight year old stood in the playground while classmates lined up to touch his afro hairstyle. “We were envious, we reckoned he wouldn’t have to comb it at all,” recalls fellow student Liam O’Connor.

According to the guitarist, its producer Scott English “had this enormous bag of grass, he threw it on the table and said, ‘Help yourselves, boys’. That was it, it was just a haze.”

When Lizzy first moved to England, the frontman became so tongue-tied that communication with audiences became an issue. “Between songs he ummed, aahed and mumbled awkwardly,” says the book. “Ted Carroll [manager of the era] went so far as to prepare rehearsed lines for him to say to the crowd, which only served to make things worse. In the end, Eric Bell undertook the majority of the talking.”

Lynott’s reputation as a ladies man is well documented but he demanded complete exclusivity from Gale Barber, the girlfriend for whom he wrote Still In Love With You. This would extend to assigning friends to monitor her movements while he was away from the flat they shared, or late night inquisitions by telephone.

The concert release that made Thin Lizzy stars was to have been called Thin Lizzy Live – there’s even an early proof of its sleeve complete with the original title – until a throwaway comment made by Bernie Rhodes, manager of The Clash, whilst declining the idea of a film involving the two bands. When Rhodes announced, “we are political animals, everything we do has to have an element of danger about it,” a lightbulb went off in co-manager Chris O’Donnell’s head.

The draft sleeve’s front cover had featured a group photograph until being replaced by its iconic, fist-shaking, solo image of Lynott, shot by Chalkie Davies. Downey and Gorham were not amused, though sales of 600,000 copies sweetened the pill.

10) Lynott’s final days were not pretty

The book paints a grim portrait of Philip’s autumn years, star status in freefall and living alone in a house full of people he barely knew following the disintegrations of Lizzy, his marriage and the band Grand Slam. Though Lynott’s decline was gradual, the final denouement is brutal and ignominious. By the end even U2’s Bono, a neighbour in the Irish town of Howth, could no longer face the effects of the hellraising that had sucked the spirit out of Lynott. “He’d say, ‘Do you want to come down for dinner?’ And I didn’t. I didn’t know what to do because he had that that look.’”

Phil hadn’t wanted to break up Thin Lizzy but by the end had no real alternative. There were tears as they bowed out at the Reading Festival in 1983, their final British show, introducing Still In Love With You as “Definitely the last one, you know?” but he always planned a reunion.

The problem is perhaps summed up by keyboardist Darren Wharton: “Phil wasn’t a whole person without Thin Lizzy.”