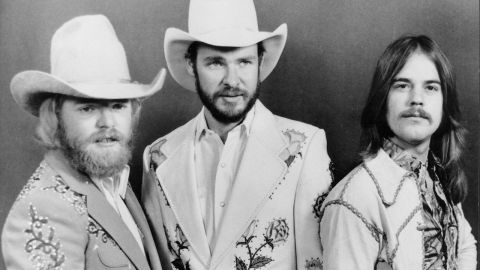 Naturally, for a band with such a long career there have been highs and lows all along the way, and this is reflected in Cinco, a box set collection of their first five albums. Cynics might say ZZ Top only make one album, and there is some truth in that, but Cinco traces their development in grungy details.

Their debut album, 1971’s unconfusingly titled ZZ Top’s First Album (6⁄10), contains songs like Neighbor, Neighbor and Backdoor Love Affair which could come from any time in the band’s career, but there’s a more conventional bluesiness in some of the material, making them harder to tell from their contemporaries. The lightness of touch is in the air, though.

Rio Grande Mud (6⁄10) opens with Francene, their first great early single, and continues with no little confidence. Even slow blues like Sure Got Cold After The Rain Fell are beginning to have that Top wink. ZZ Top are hitting their groove.

But it’s on the third album that the band as we know them really gel. 1973’s Tres Hombres (8⁄10) swings like a tequila monkey, and songs such as Jesus Just Left Chicago and Beer Drinker And Hell Raisers introduce ZZ Top’s songwriting wit. Short, snappy, and containing La Grange, Tres Hombres is the gateway drink for ZZ Top newcomers. 1975’s Fandango (6⁄10) is half live (recorded on the tour where the had several animals on stage, some of which died), half studio. While it’s (half) an excellent gig souvenir, it’s also a sign of a band in crisis, short of both time and songs. But it has got Tush on it.

Tejas (5⁄10), from ’76, is arguably a bit too musicianly, featuring the near-country rock of It’s Only Love and the almost jazzy Snappy Kakkie. While there’s not much wrong with it, it’s not great fun. The fun was yet to come.