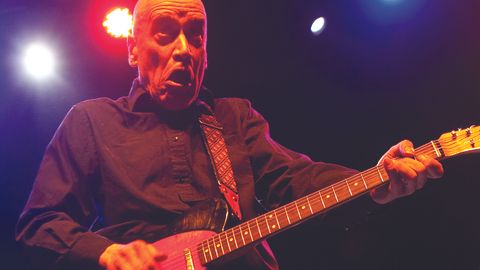 Opening for such a well-loved and pivotal musical figure could be a daunting proposition, but Joanne Shaw Taylor is on confident form tonight. Her solid rhythm section allows her to dig deep into those guitar chops, the SRV influence being abundantly clear in her staccato rhythm and extended solos. Despite frenetic fretwork, it’s when she slows the pace for a bruised ballad about the recent breakdown of a relationship that she sounds the most soulful and convincing.

Wilko Johnson walking onto any stage in 2016 is cause for celebration of course, and tonight’s crowd gives him the obligatory hero’s welcome. For a man who wasn’t supposed to be here at all – Johnson revealed he had terminal cancer in 2013 and had been given less than a year to live – he is reliably eccentric and defiantly charismatic. As soon as he straps on the trusty red and black Telecaster and fires up that inimitable choppy guitar sound, there’s a sense that everything is as it should be. All Right from the Solid Senders era is followed by If You Want Me, You’ve Got Me, the first appearance of his trademark manic strut during its solo eliciting a fervent response from the audience.

Naturally, there’s a generous helping of Dr Feelgood tunes too, Going Back Home being the first reminder of the band’s confrontational energy and enduring legacy. Wilko manages to forget the words to Roxette but, conveniently, when you’ve written a bona-fide classic you can rely on the crowd singing it for you. The Feelgood material does miss the hard-bitten delivery of Lee Brilleaux a little – nobody would call Wilko an outstanding singer – but drummer Dylan Howe and bassist Norman Watt-Roy retain the punch of the originals. As a former member of The Blockheads, Watt-Roy knows a thing or two about nailing a groove, and his introduction by Wilko garners one of the biggest cheers of the evening.

Machine Gun Guitar and Everybody’s Carrying A Gun allow Wilko to deploy another familiar move as the guitar is held at shoulder height and trained on the crowd, before the feisty finale of Back In The Night and She Does It Right. He’s not getting away that easily though, returning for an encore of Chuck Berry’s Bye Bye Johnny and skittering across the stage one last time. Long may he continue.