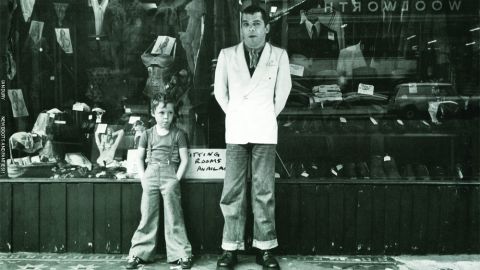 Razzle In My Pocket, the cheeky tale of a jazz mag purloined from the local newsagent’s; Billericay Dickie, the cheeky tale of a naughty chap who likes to brag about his sexual conquests in the lewdest terms imaginable (even now); Plaistow Patricia with its classic opening line of ‘Arseholes, bastards, fucking cunts and pricks’ being yelled across every schoolyard in the land that year. Faultless, flawless – although with plenty of flaws, and chances taken.

This album is a riotous celebration of East End culture and lad braggadocio, with the odd touchingly tender moment (‘I come awake with the gift for womankind/You’re still asleep but the gift don’t seem to mind,’ he sings on the jazz-slinky smooth Wake Up And Make Love To Me, and there’s a shout-out to Dury’s dad on My Old Man). It’s one mutha of a tribute to Gene Vincent, starting off slow and exploding into fury and passion.

His razor-blade earring and dubious Cockney patter were a major influence on Johnny Rotten and Madness, two among a myriad of musicians and genres. His music was a breathtaking mishmash of music hall, swing, jazz, rock and nefarious blues. (His backing band The Blockheads featured Chas Jankel and Wilko Johnson for Chrissakes!) And his words… well, there ain’t half been some clever bastards.

This reissue of the first Dury album comes in a lovely box set – the four discs include the original, a live recording, the demos and various sundries, plus sleeve notes from Phill Jupitus – and is pure gold from beginning to end.