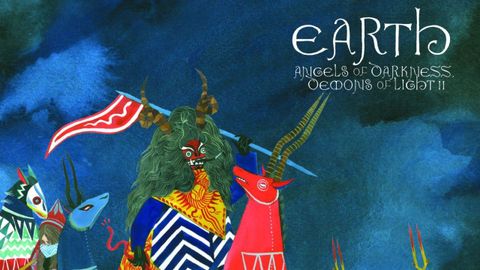 There are people who still describe the music of Earth as drone. That may have been accurate 20 years ago.

Today, though, one would have to be a particularly cloth-eared oaf to describe this challenging, dark Americana as such. No drones, no doom metal. This is closer to the spirit of John Fahey than to Mudhoney.

The first volume of Angels Of Darkness Demons Of Light, released in 2011, was a radical departure for guitarist Dylan Carlson. With a new line-up, this time including cello, the sound of Earth became much more contemplative and minimalist – heavy, but a different kind of heavy. Where the first set was relatively structured, the second is looser, more improvisational.

It’s reminiscent at times of Godspeed You! Black Emperor, though without building to fuge-like crescendos. Like GY!BE’s music, Earth’s new sound evokes deserted post-apocalyptic landscapes, deserted cities, abandoned buildings, rotting cars. But there is also a lightness, an airiness that wasn’t present before, with shards of illumination that counterpoint the luminous gloom of their sound.

This is obviously music of limited appeal, and if you don’t ‘get’ it then words of persuasion are wasted. But if you have musical adventure in your soul, Earth are way out there on the perimeter to play you something you’ve never heard before.