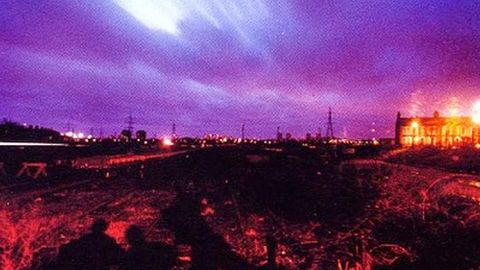 As Simon Reynolds (the critic who coined the term) had it, post-rock was about using rock instrumentation for non-rock purposes, using guitars as facilitators of timbre and textures rather than riffs and power chords.

And so it is on Hex: the seven tracks contained on this 1994 album may come to occasional stops and refrains, the vocals whispered/lullabied like a bevy of saddened, friendless Talk Talk and AR Kane fans, but throughout there is a determination not to be weighed down by heedless expectation: this music, while symphonic in structure, exists within the moment and the moment alone. Moments like the crystalline tumbles of sound washing across the middle section of Absent Friend feel both haunting and captivating: an overcoat of rock instrumentation perhaps, but with the feel and lineage of ambient dance music or a Philip Glass. Or even Mike Oldfield’s Tubular Bells.

Throughout the entirety of Hex, the mood captured is one of rain-splashed, neon-reflecting deserted city streets: down but not depressed. Urban anguish.

A direct line can be traced between the spellbound meandering mesmerising music here back to the roots of avantgardeelectronica, minimalist classical and 1980s synth-pop, and forward to bands such as Sigur Rós, Godspeed You! Black Emperor, Mogwai and Tortoise (among many others).

Hex was Bark Psychosis’s final moment (and debut album): although the band disintegrated soon afterwards. The mark they left is indelible.