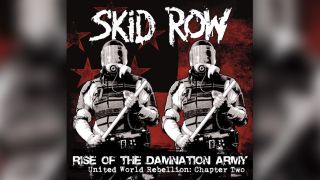 Skid Row guitarist Dave 'Snake' Sabo says the band are at their best with their backs to the wall – and they'll prove it with their next EP.

Rise Of The Damnation Army – United World Rebellion: Chapter Two follows their first instalment, which was launched last year and set the scene for a series of releases.

The new seven-track collection will appear on August 4 via Megaforce Records. Sabo says of their new style of working: “We seem to be at our best when we’re faced with adversity. It’s us against the world again, and by ‘us’ I mean the band and the fans who stick by us.”

Bassist Rachel Bolan says it’s all part of a plan to remain relevant, without relying on their past achievements. “We wrote songs and hit the road,” he states. “We sunk our heart and soul into it, letting people know we weren’t doing it for the lack of something better to do.”

The five-track EP is accompanied with two bonus cover versions.