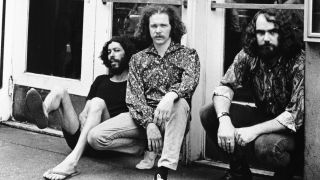 Never in his wildest imagination could master illusionist David Copperfield have dreamed this one up: levitate the Pentagon, America’s stark and forbidding defence HQ, 300 feet skyward, then spin it round in mid-air for all to see, as a protest against US involvement in the Vietnam War.

The germ of this mind-boggling plan came from Allen Cohen and Michael Bowen, editors of 60s influential San Francisco underground newspaper The Oracle. Having stumbled across a passage in Lewis Mumford’s The City In History suggesting that the five-sided Pentagon’s very shape and structure harboured an occult evil, they decided that somebody had better do something about it.

That ‘somebody’ turned out to be The Fugs, a group of New York beatnik poet-musicians. Led by Ed Sanders and Tuli Kupferberg, their anarchic anti-music put primitive noise together with satirical lyrics that mixed sex, drugs and politics. Having caused controversy with their 1965 debut, The Fugs First Album, which featured the line ‘Fuck like an angel’ in the song Supergirl, they were the perfect anti-establishment band.

And so, on October 21, 1967, as part of a bigger anti-war demonstration made up of 100,000 protestors, The Fugs pitched up at the Pentagon with film-maker and magician Kenneth Anger, Yippie agent provocateur Abbie Hoffman and assorted hip luminaries. An hour later the chant went up: “Out, demons, out! Out, demons, out!” The battle – magick against the military – was on.

Ed Sanders (vocalist, The Fugs): We had a gig that weekend at a psychedelic theatre, the Ambassador, in Washington. Me and Tuli Kupferberg used our salary from the gig to pay for rental of the things we needed for the exorcism – a flat-bed truck, a PA system, a cow, some flowers and so on. One man who had a major influence was my friend Harry Smith, the film-maker and music anthologist, who was also a magician. I went to Harry when the idea first came up, to get advice on how to exorcise the Pentagon. He advised us to circle the Pentagon with a trail of corn meal, and to consecrate the four directions: north, south, east and west.

It was Harry who advocated the use of a cow, which we acquired from a farm in Virginia. We painted it to represent the Egyptian goddess Hathor, but the authorities prevented us from bringing it. We also had made arrangements for a plane to fly over and drop daisies on to the Pentagon while we were performing the exorcism, but the authorities at the airport interceded.

Jan Rose Kasmir (hippie demonstrator): I was 17 years old. I didn’t have permission to go to the demonstration but I snuck out and went anyway. The most shocking moment for me was when I arrived and there were all these normal-looking people. I had expected strictly freaks, but the overwhelming majority were priests and nuns and mothers with strollers and babies. It was amazing: middle America showing up because, like me, they felt this same terrible sense of frustration over the war in Vietnam. Ed Sanders: There were some speeches, and then the demonstrators set off from the Lincoln Memorial and marched across the bridge over the Potomac River to the Pentagon.

Danny Kortchmar (guitarist, The Fugs): When our truck arrived there was no one at the Pentagon except us and the National Guardsmen. As we drove towards the soldiers, Abbie Hoffman pulled out a water pistol. He was waving it in the air and yelling: “This pistol is filled with LSD. I’m gonna squirt the troops and get them all high.” We thought he was going to get us all killed.

Charles Seluzicki (volunteer marshal): I was 19 years old, a Catholic college boy with long hair, my transistor radio in one pocket, a copy of Camus in the other, a red bandana tied around my right knee, my armband identifying me as a marshal. It was our responsibility, if we saw a conflict developing, to try to talk to people and calm things down. The government had promised not to put up fences or impede the march, but when we got across the bridge there were fences everywhere and machine-gun nests at the corner points of the Pentagon. The Yippies were in group number one and they were tasked with knocking down the fences so that people could walk. The big change that day was that passive resistance had changed to active resistance. People were deliberately getting themselves arrested.

Danny Kortchmar: While we were setting up in the parking lot to play some Fugs tunes to the demonstrators, I noticed about 30 guys dressed in Nazi uniforms, wearing guns and carrying signs saying: ‘Kill everybody’. These people were much scarier than the National Guard. Ed starts shouting taunts at the Nazis. In the end, though, they didn’t do anything, probably because they knew they were heavily outnumbered.

Ed Sanders: Before we started the exorcism, we followed Harry Smith’s directions, sprinkled the trail of cornmeal round the Pentagon perimeter. We also had Native American blessings, so it had a certain amount of structure. It was like the Vietnam War was a plague and we were trying to cleanse it out of the military.

Danny Kortchmar: Once we got the PA going, Ed started to rabble-rouse… something he was great at.

Charles Seluzicki: I heard the announcement about the exorcism and levitating the Pentagon. They had bullhorns so, if you were on the lawn in front of the Pentagon you could just turn around to see it happening. I went over and, I swear to you, the actual group who gathered was probably no more than a hundred.

Ed Sanders: I had put together some text for the exorcism and I had it written down. Stuff like: “In the name of the generative power of Priapus, in the name of totality, we call upon the demons of the Pentagon to rid themselves of the cancerous tumours of the war generals.” I also made up a few lines in the fervour of the moment.

Danny Kortchmar: I heard a ruckus behind me and turned to see Kenneth Anger freaking out under the truck, calling for violent demonstration.

Ed Sanders: Anger had a pentagram made of sticks, some tarot cards, things like that. He was not friendly. A guy from Newsweek tried to speak to him while he was busy with his magical ceremony, and Anger hissed at him like a snake, so we just left him alone.

Charles Seluzicki: The Fugs presided over the exorcism. Ed Sanders delivered the amazing incantation that ended with the gathered marchers repeatedly chanting: “Out, demons, out!” It was magical. In your heart of hearts you know you’re never going to levitate the Pentagon, but the very idea of it was so wonderful, who wouldn’t try?

Ed Sanders: WBAI, the radical radio station, taped the whole exorcism, which is how we were able to put it on the album. We all chanted together. People really got into it and joined in.

Charles Seluzicki: I had my transistor radio with me, so I had the interesting experience of listening to news reports while I was actually taking part in the event. I vividly remember, in mid-afternoon, hearing a news report which said that tear gas had been fired on the crowd. At that very moment I was tying my bandana over my nose because wafts of gas were passing over me. People all around me were coughing and spluttering. A moment later the radio announcer said: “We were mistaken. Gas has not been used.” Things like that were happening all the time. I saw conflicts between protestors and soldiers, some of whom had neglected to put their gas masks on so they were all goofed up too. There was a guy up on a wall tearing an American flag in half, just drama everywhere. Some of these young soldiers were throwing their rifles down and breaking ranks.

Ed Sanders: We still had our long-stemmed daisies because the plane had been stopped, so I handed some of them out and the stems made it quite easy to slip one into the barrel of a rifle. You could see how nervous these guys were, but they had the discipline not to start firing. If we’d tried that nine months later in Chicago, things had got so bad that I think we’d have got shot.

Charles Seluzicki: As night fell, the air got chilly. All across the expanse in front of the Pentagon you could see little fires. Young men were holding their burning draft cards high in the darkness. That night, it still brings tears to my eyes.

Ed Sanders: When it was over, we still had a gig to play at the Ambassador. But of course Tuli had been arrested during a sit-in with Robert Lowell and Dwight McDonald and the others. As a result he couldn’t make the gig. We still played. That’s showbiz. The beat goes on. I didn’t even really have time to think about what we’d achieved that day.

A recording of Sanders’s exorcism is on The Fugs fourth album, Tenderness Junction.

The Pentagon remains firmly attached to the ground to this day.