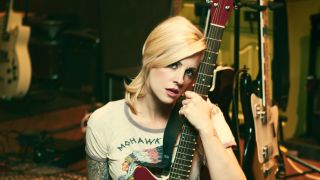 “After The Distillers and Spinerette I thought I’d never make music again,” admits Brody Dalle. “I got pretty burned and I thought that was the end.”

The Distillers released their final album, Coral Fang, in 2003. Does that seem like a lifetime ago now?

Yes and no. A lot has happened over the last ten years. I’ve got married, I’ve had two kids, I made a couple of records, lived through my husband making three or four records, and shook off some unhealthy habits. A crazy time.

When did you actually begin work on Diploid Love?

I started working on it before I got pregnant with my son, so over three years ago. I went into the studio when he was eight months old, and got all the fundamentals recorded in about three weeks, and then I tinkered with it for another year while I was looking for a label. And then Jim [Chancellor] from Caroline said: “Two of these songs aren’t good enough.” So I went back in and flipped I Don’t Need Your Love and Blood In Gutters – which started out as screaming hardcore songs – on their heads so that they sounded completely different – and much better.

The demands of motherhood meant that Spinnerette didn’t tour as hard as The Distillers. Will you tour Diploid Love more extensively?

I hope so. My husband and I are playing the same festivals in July and August, and that’s so that we can both work and take our kids with us. We’re still finding our sea legs as a band, we’ve only played eighteen shows, but we want to push this hard.

Shirley Manson is one of the guests on the album. How did your friendship with her develop?

The Distillers opened for her on a tour that was Garbage, No Doubt and The Distillers. I was twenty years old and I’d just sit and watch her in awe. She’s a like big sister to me; she’s really supporting and loving, and I could listen to her opinions on the world all day long. She’s so cool.

What will define success for you with Diploid Love?

Just that I’m happy with it and that the people that I love are proud of me. I can dream that I’ll be the number one rock’n’roll star in the world, but I don’t want to set myself up for disappointment. I wear a piece of wood around my neck and scream at people and they like it, and that’s amazing to me. Spinnerette was such a disappointment and it was my fault. I wasn’t in the right mental space to do anything with it. My social experiment was putting my ass on the back cover of my record as I thought that would help me sell records. I was wrong. _ _

Why should someone pick up a copy of your new album?

Because I like it, and I have good taste. Sometimes you have to take a chance – you might just fall in love.