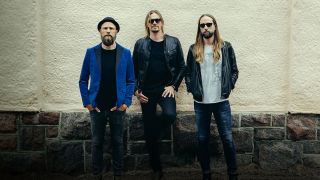 It’s been a tumultuous 12 months or so for Von Hertzen Brothers. Since 2015’s New Day Rising album the band have ditched their label, changed management, lost band members and even contemplated the end of VBH. They took a sabbatical, took stock, and asked questions about the potency and point of the songs they write. Put simply: they had something of an existential crisis. Thankfully the soul searching has paid off with the wondrous War Is Over, arguably their best album yet. Mikko Von Hertzen looks back over those troubled times and talks about the new album.

It sounds like the band was in a state of flux following New Day Rising, which is surprising given how strong the record is.

We were. The album did well, but at the same time all the people around us – management, the label – lacked any real enthusiasm. It was almost like they didn’t know what to do with us. It was such a pity, as we put a lot of effort and time and money into that album, but somehow we felt like an end of an era was looming. The guys that used to be with us started looking for other bands to play with and it was all very confusing. We didn’t know what to do next. It was like the house of cards that we’d built for all these years had suddenly started coming down. It was a rough time for us.

Is that why you took the sabbatical? Was there a point where you sat down and had to decide where to go with the band?

We did a ten-year anniversary tour in Finland last year for the Approach album, and after that we took a break, you know, “No one talk about the band. Let’s take a few months off and then we sit down and start discussing what we might do in the future.” And that’s what we did, and we said everybody write their own songs, and if it so happens that we feel there’s something in the songs, that the light that’s been smothered is still in there somewhere, if that starts to burn and we feel that we need to do those songs, then we do it, but only then.

And if those songs hadn’t sparked do you think it would have been the end of the band?

Yeah, we were talking about that. The thing is, we did have quite high expectations for New Day Rising, and there was bound to be some disappointment. We kind of thought this album is so good that it has to take us to the next level, and when it didn’t do that it was kind of like, “Uh… what shall we do now?” I think we were looking at it as the album to galvanise us and the people around us, and it fell far short of that.

So the War Is Over sessions brought the band back to life?

That space, the being apart, made us realise that we still had something to say. We were sending songs back and forth and they were good songs. That was like a reboot for the band.

You wrote and recorded a lot of the record at your grandfather’s old cottage outside Helsinki.

It’s a beautiful place, two hours outside of the city; he bought it without even seeing the place. One of his friends went out with a boat and looked at it from the sea; there were no roads leading to that place. This was forty or fifty years ago. Now it’s this incredible spot where we go to write. There are no neighbours, it’s in the middle of the forest and you can dip yourself in the sea. We did the pre-production there and all my vocals. We built this mobile booth with mattresses everywhere to deaden the sound.

Definitely, because Garth Richardson, who produced NDR, is from that school of thinking that everything has to be rigidly organised and very tightly arranged. He took that to an extreme level, and that’s not familiar territory to us. Whereas with this, because we produced it ourselves, it was more like, let’s have a fucking guitar solo on every song! And it was fun to do it like that. Some of the takes that ended up on the album were live takes. I think we were reacting to how we did the last record.

The album title reflects its themes: a plea for understanding and peace.

The world we live in now is such a different place from even five years ago, and that’s seeping into the music, even if I don’t write about politics in my songs. But you can’t avoid letting these things affect you, so you need to say something about how we treat each other. I want to take a stand, and we have to be patient that this will end and that we are going to find peace; that we don’t have to be engulfed by this fear and insecurity.

War Is Over is still relatively fresh, but how does the album sound to you now?

I think we really succeeded on this album. Everything is so processed now and I hate that, so it was important that we capture the human behind the instrument on this record. I don’t want to dismiss our previous albums, and it may be narcissistic to say this, but I think this our best album of our career, I really do. It’s such a warm record. It’s the sound of a band being true to themselves.